Those eyes and that smile, Richard Madden is Prince Charming in the Disney CINDERELLA movie that took the box office by storm this past weekend. 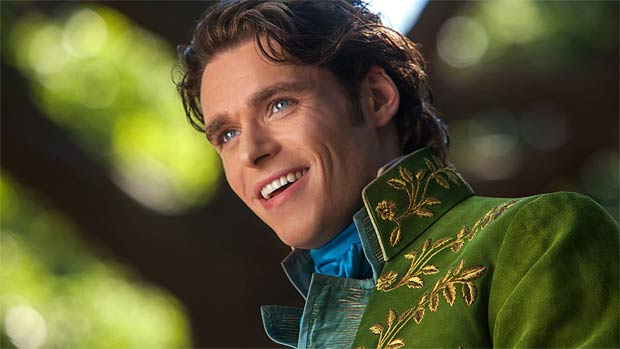 My Interview with Richard Madden – Prince Charming from CINDERELLA

It was such a pleasure to interview Richard Madden a couple weeks ago during the Cinderella Event. There were 25 bloggers in all, asking him everything from What scenes made you cry to issues with the costumes (trousers!). He was a pleasure to talk with.

There are several heart-gripping scenes in CINDERELLA, one of which is very, very moving with the Prince. The movie really developed the characters of the Prince and his father, the King. There was a mutual respect and love between them that was well played on the screen. That made the scene where the King dies quite emotional.

Q : Were there any scenes that made you cry?

RM : Yeah the scene with Derek uh playing the King. [OVERLAP] That was a very– that was an emotional day and– but a really good one. I love, I love working with Derek. Um it was kind of an icon to me. Um and that was kind of a really moving scene. He plays it so beautifully it’s– it was hard not to get caught up in that.

I was dying to ask about this scene as well. You’ll know what I mean when you see the movie. It was such a touching scene with the King dies. The Prince was so vulnerable, like a child.

My Question : For that scene um you were almost like in a fetal position with her and that was just so touching and it just like breaks your heart. It was kind of  when Cinderella was with her father. So was that kind of directed that way?

RM : Yeah it was directed that way, but I think that’s– I had chats with Ken at the start and we wanted– it was important I think how we see these two characters. You know I think first and foremost Cinderella’s a daughter and the Prince is a son and they’re so influenced by their parents. And I think that’s how we get to know them and get to know their personalities and what they’re like.

Q : You seem so vulnerable and just so strong at the same time it’s amazing.

RM : Thank you very much.

Q : What was your favorite scene?

RM : The first scene that I show up with Lil um which is us on horseback when we first meet in the woods. 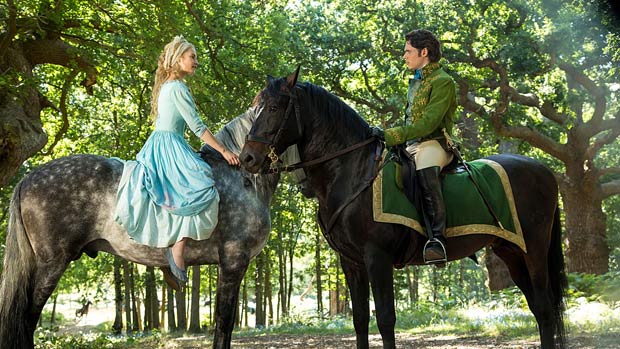 So you kind of have all, all of that going on on top of us kind of trying to play that scene. And I love what Ken wanted to do that– these, these 2 huge beasts. They were both trying to control and their feelings and, and this kind of dance that they do on the horses

That was one of my favorite scenes of the movie too! You can see part of this scene with this new Cinderella Trailer:

The only chance you get to hear behind-the-scenes type of stuff is at interviews like this! This explains Lily James’ tiny, tiny waist during the movie – although she is a lovely, thin woman already.

RM : Uh yeah. Um well Lily used to burp just all the time.  It’s– ‘cause she’s got this corset on and she can’t really eat anything and especially when she was kind of first getting used to it.

And she’s kind of over eager and like just to eat a sandwich or something and it would like–   we shot them filming for like an hour because she’d be fine, she’d be fine. And then the food can only go so far and of course it actually means nothing else can go through.

And then you could just see her face like tears welling up and her like burping and be like  get the corset off now, um but you know the fun– the funny bit was um uh the girls having to do with– that had to go to the bathroom.  .

Yeah and there was lots of potties on set. (For more on this, read my Interview with Lily James!)

Richard Madden even had advice for the modern woman on finding her own Prince Charming – without a Fairy Godmother.

Q : We talked a lot about Cinderella’s outfits during the movie, but yours were also pretty interesting and, and intricate in many ways. What was your thought process when you were first introduced to some of the outfits you had to wear? Because they’re not something you usually wear. You have an abundance of leggings.

RM :  Um well it was a really good actually. I, I love Sandy Powell who designed these amazing costumes. And when I first met with her I was really keen to make sure that the Prince retained a, a masculinity with these costumes ‘cause a lot of times in these Disney films they, they would not be very masculine and they’re really decadent and extravagant, but actually Sandy who we talked about it.

She– that’s what she wanted too and you know they are beautiful and detailed and, and gorgeous, but also they’re all rigid in practicality. All of them. I mean the boots I’m wearing are great for riding. You know the, the, the tight pants have a stretch in them, which is great for being on a horse. You know the jacket set– that first jacket I wear sets in a way that’s perfect for being on a horse and how it comes down. So they’re rooted in a practicality.

I mean when I first saw the ballroom outfit uh and I walk in and it’s like white with silver and sequins and glitter. And I’m like, “Sandy we talked about the masculinity.” We agreed on something and that’s just not it. Uh but actually once you put it on it does make me feel regal.

And you know you put them into the, into those sets and with all the other characters and it doesn’t feel out of place. You know when you’re in a little studio room you know trying on these costumes you’re like, “How am I gonna’ pull this off?” And then you kinda’ get on the set and suddenly it feels completely natural. It’s actually empowering.

Q : Did you– before you talked about Lily– we talked to Lily and she said that uh she had several wardrobe malfunctions you know with you ripping her dress dancing and then she called. Did you have any issues with yours?

RM : Um yeah a lot of– just a lot of self-consciousness you know.  You’re in those trousers and you’re like kind of skirting the wall because if you really exposed you wanna’ to cover your butt up and then– Oh I know! And turn the other way and cover that up and  but you get used to it eventually.

What a fun interview! We even had the chance to get a group photo!

CINDERELLA is in theaters now! Find your local theater here. 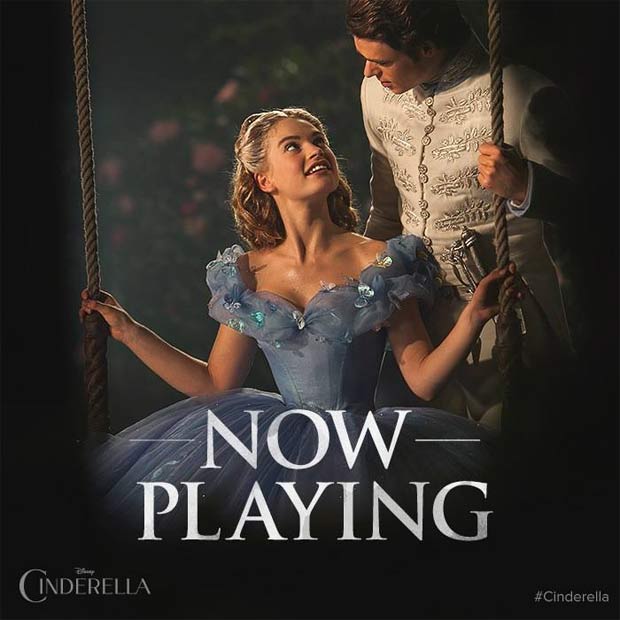