If you don’t have plans for this afternoon, head on over to the beautiful Akron Civic Theater for a wonderful production of Angelina Ballerina the Musical! Today at 3:30, the award winning, Off Broadway company, Vital Theatre Company and Hit Entertainment will present this family-friendly show based on the beloved CG-animated “Angelina Ballerina The Next Steps” shown on PBS KIDS.   It’s hard not to love Angelina Ballerina, a spunky, little mouse with big dreams of one day being a prima ballerina. 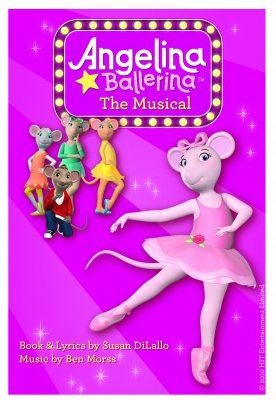 In Angelina Ballerina the Musical, Angelina and her friends Alice, Gracie, AZ, and Viki are beside themselves because a special guest is coming to visit Camembert Academy (how appropriate that a dance academy for mice is named after a cheese!  🙂  ).  In fact, even the children’s teacher, Ms. Mimi, is excited beyond belief with the arrival of their famous guest.

Angelina and her friends are eager to impress their guest with their dance skills.  They perform dance of all types – including hip-hop, modern, and Irish jig and ballet for their famous visitor.  The question is, will Angelina get the starring role in their performance that she is hoping for?  You’ll have to go see the show to find out!

A Little About Vital Theatre Company

Since its founding in 1999, Vital Theatre Company has presented over 75 original productions to over 300,000 children and their families..  Vital Theatre Company (located on New York City’s Upper West Side), commissions 3-5 new musicals for children each season.  In 2012, it was honored with the 2012 Off-Broadway Alliance Award for Best Family Musical, and has also won two Awards for Excellence by the Off-Off Broadway Review.