Wow! I’ve never done anything like this before! Although I’ve been focusing a lot on food presentation (and photography) I’ve never had the opportunity to build a structure to display food!

This week I built a trial run Ortega Taco Fiesta Stadium for the big game and brought it to the Pinewood Derby Races for my son’s cub scout event.  Ortega supplied what I needed as well as construction instructions from  Dan Macey, at dantasticfood, Inc. Thanks Ortega! 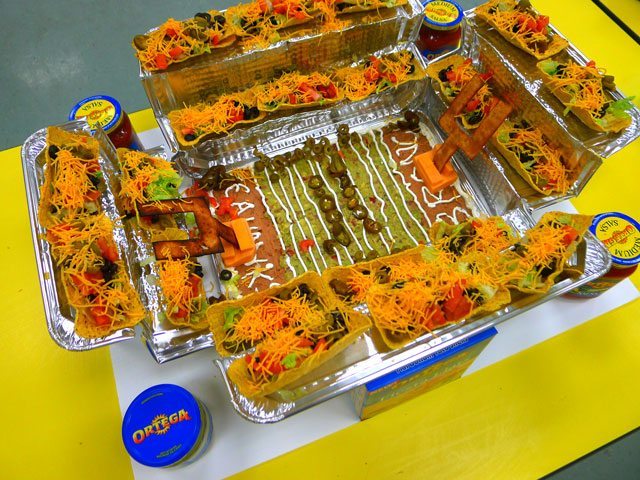 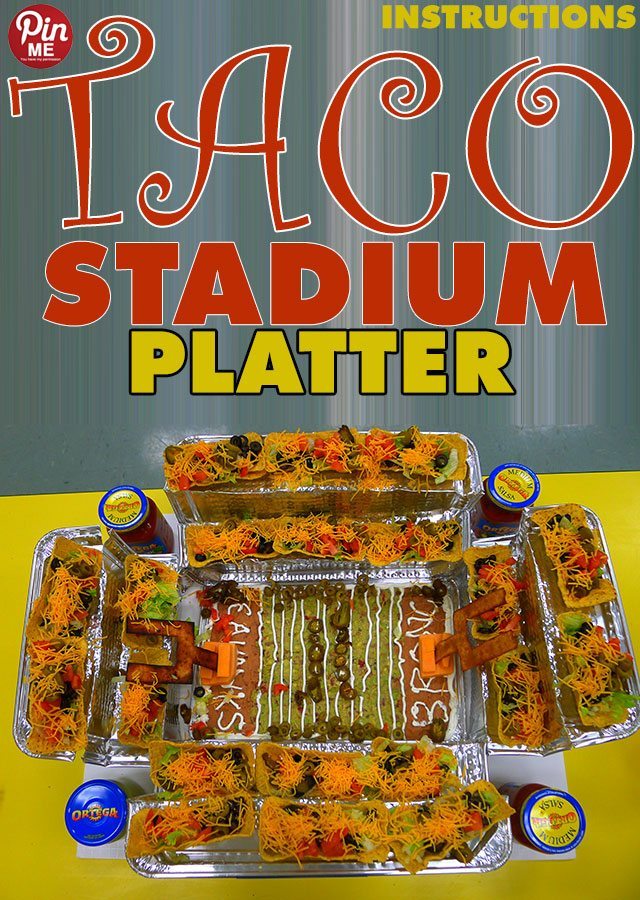 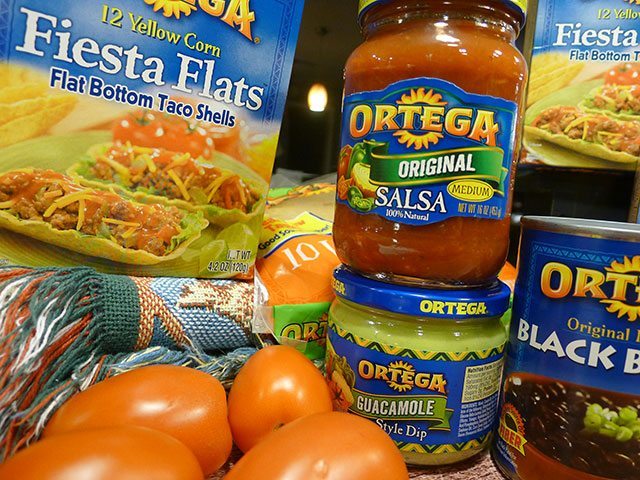 Construction of the Stadium

Place the Foam Core on your table.  You won’t be cutting it at all, but just using it as your base.

Place one of the 5 cookie sheets in the center of the foam core length wise- This will be your playing field.  Tape it down later.

With your kitchen shears, Cut one end of the 2 width wise short stadium seating foil cookie sheets to make them square.

Make 1″ cuts along the short side of each of the four cookie sheets to make bending points.    Make three cuts on each side that are all equal in distance apart from each other and the edges.

Fold and crease each of your four cookie sheets in a zig zag pattern along the lines where your cuts are placed.

Remove and set aside y our Ortega Fiesta Flats from their boxes.  Close the boxes back up with packing tape.

Attach Packing Tape in a loop to the top of each of the four boxes so there is a sticky side that can attach to the foil. 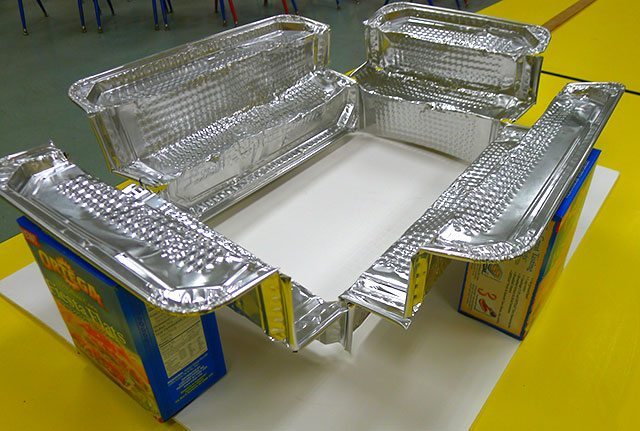 Position and adhere each box to the center of the top of each zig zag component.  The box acts as the strength needed to hold up your stadium seating.

Place and tape down the box/stadium seating to 3 out of four sides of the foam board around the field- leave one end open to be able to insert the field filled with Ortega guacamole dip later.

Complete the food portion of this construction process (described below), and then slide the field into place when you are ready, and tape down the remaining side of stadium seating.

The first portion of preparation is that of the goal posts for the football field.  Cut each goal post out of a 8-10″ tortilla shell.  Create the goal shape you see below.  Fry the goal post in a small amount of vegetable or canola oil on your stove top and then pat dry with a paper towel.  Let sit out and dry.

Second, use your block of cheddar cheese and create a stand in which the goal post sits.  Your goal post will not be very rigid (it’s just fried tortilla, like a chip) so you have to dig out a slot from your block of cheese to make it fit.  Make your cheese base as big or as small as you like. 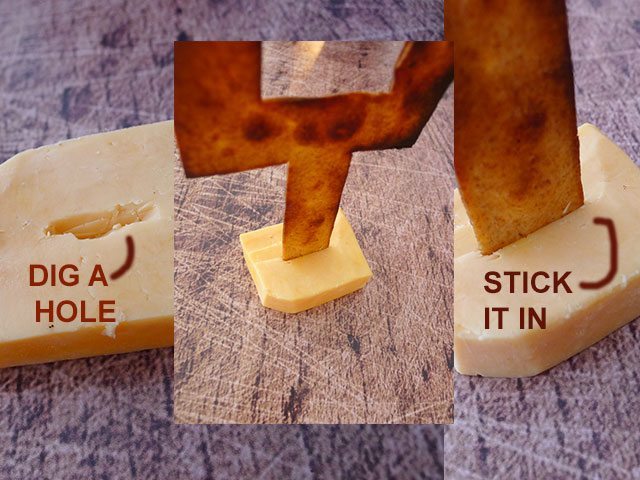 An hour before your guests arrive, create your football field.  Split your refried beans in two and spread 1/2 on each side of your field dish.  In the center spread out your guacamole.

Use your frosting bag and small nozzle to create the lines in your field, or trace around the edges to create the borders.  I am not an expert at frosting, so yours could come out way better than mine below.  I kept adding and adding- but in the end the extra sour cream made it taste great.

I placed the goal posts with cheese base on each end, and added some extra jalapeño slices to act as players.  You’d be surprised how well jalapeños go over in a crowd- with them very visible, people appreciate knowing that they are there/to avoid them. 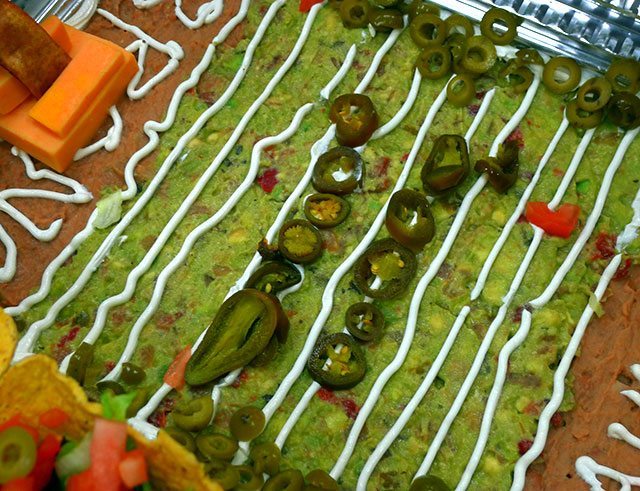 Getting closer to game time, add your Ortega Fiesta Flats to all of the stadium seating.   You may find that you need to create better bucket seats in each of the foil areas.  This isn’t a perfect system- just make it work for now- if things fall in later, just say “who is causing these earthquakes?!” 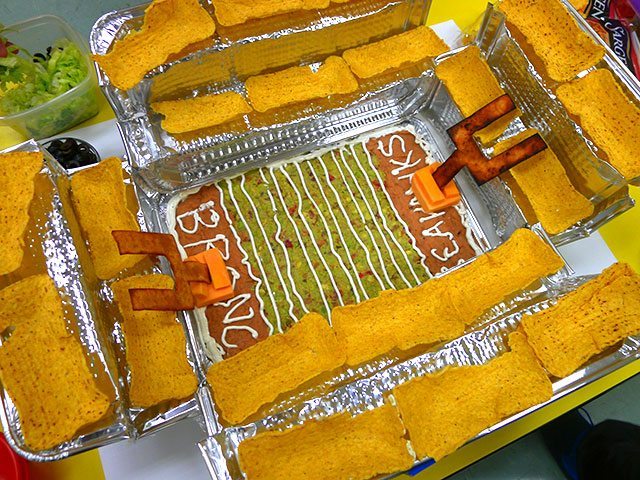 Next, load your fiesta flats up with shredded lettuce, olives, tomatoes, black beans and cheese.  In the end I had a few extra olives and tomatoes- and any more may have made things fall in- but it was fun for the family spreading everything around! 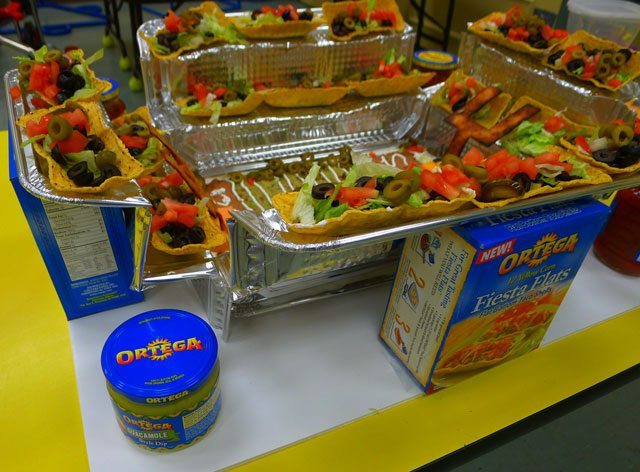 Just another view of the process- before the cheese blanketed everything. 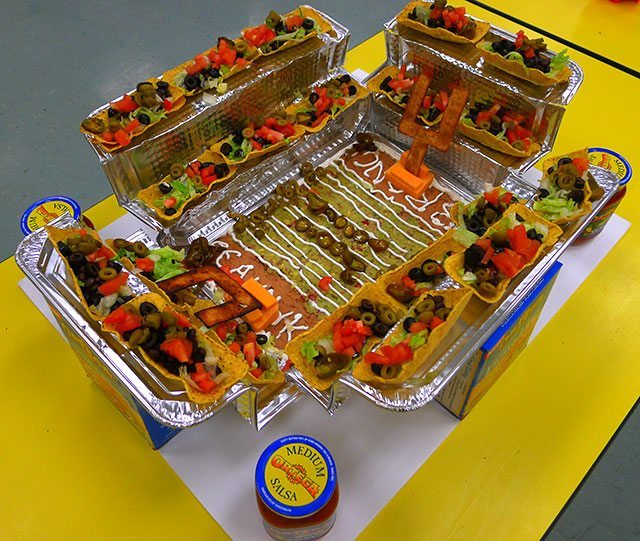 I received dozens of positive comments about this platter.  The food itself was not expensive and the structure was even less so. But the overall effect of a giant stadium on your table is AMAZING. 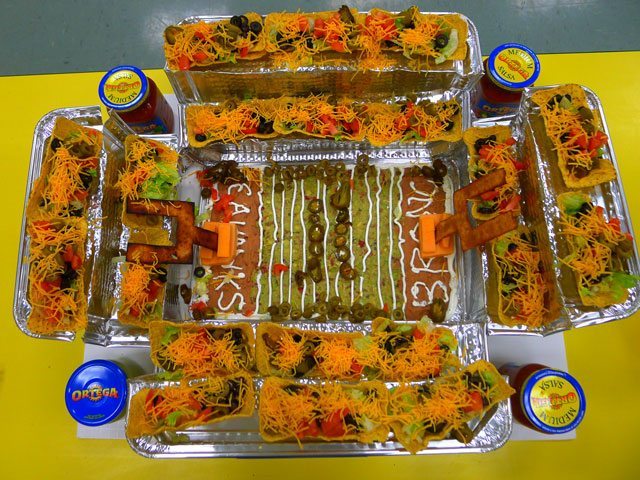 Do share this with your friends socially, and let us know if you have decided to craft one of these!!