If you are anything like my husband and me, you’ve no doubt been tuning in for updates on the terrible tragedy in Japan.  Or should I say tragedies–earthquake, tsunami, continuing aftershocks, and  nuclear meltdown threats.  I’m not even there, and it’s almost too much for me to process.  The sight of complete villages leveled like a pile of matchsticks, the statistics on the thousands that are still missing or dead, the reports of supplies of food, water, electricity and gas not being adequate for the millions that call Japan home – it’s all overwhelming to me.  I began questioning myself, ” If I were there, living through all of that fear and turmoil – how would I react?  How are the Japanese reacting?”

Then, as my husband came to bed the other night, he shared what he had just seen on the late evening news:  Since the quake, there have been little or no reports of looting anywhere in Japan.  Wow!  In other disasters, both here in the U.S. and around the world, citizens have gone into “survival mode” and taken whatever they could get their hands on.  Yet the Japanese stand steadfast in their respect for each other. 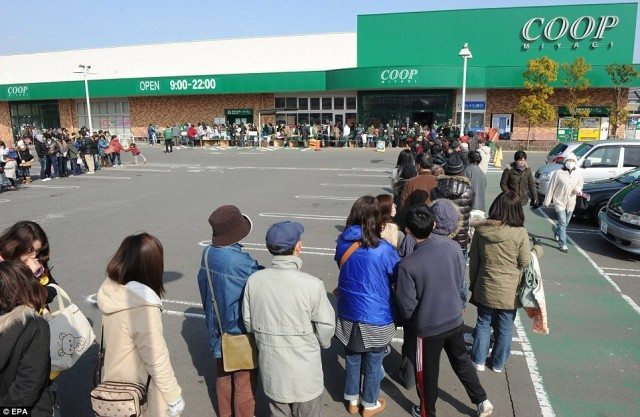 Another news story told of how Japanese survivors, waiting in long lines for rations of food and drinking water, were found dividing rations meant for only four people, and making it feed six hungry and dehydrated bodies.  And in many cases, this amazing act of brotherhood was not with family members, but with strangers.  Still others have told how, in over packed shelters, uniformity and respect for others rules.  No family has a larger area to live in than another, free noodles are offered many places, and no one goes back for seconds – though everyone is hungry.  It just wouldn’t be fair.

I find this simply amazing, and admirable!  Faced with complete devastation and desperation, the Japanese, as a society, continue to live for the greater good. I can learn something from that – I think we all can. Too often these days, a tragedy or “tough times” or even a differing of opinions brings about finger-pointing, and stooping to the lowest common denominator.  What could we accomplish if we instead, set our sights on our highest common denominator–that of caring for and sharing with one another?

Blessings to you, my Japanese brothers and sisters!

If you’d like to help the Japanese, you can text “Red Cross” 90999 and a $10 donation will automatically be made to the American Red Cross.  Or, for more information, go to www.redcross.com.

3 thoughts on “A Lesson Worth Learning from the Japanese”