My kids are the perfect age for Christmas, 3 & 5. They are so excited, singing songs and bouncing off the walls in anticipation of Santa! After Christmas Eve service tonight, my daughter fell asleep and didn’t get to participate in setting out cookies for Santa. Elijah took care of it so, Don’t Worry Santa!

This year, we sort of made Santa’s Favorite cookies from a recipe we received from Santa at Stan Hywet’s Dickens Christmas this year. I say sort of because I ran out of shortening for the original recipe so I just crushed up the candy canes and added them to regular chocolate chip cookies. Hope you like them Santa!

Last month, Elijah, my 5 year old had a great idea. He said, “Mom, I have a great idea. We should leave Santa a Thank You card for all the presents because I don’t think many people say Thanks to him”. My heart melted, what a good little boy! He’s mentioned this several times over the past few weeks but tonight, I forgot about it. Luckily he didn’t forget and made this cute card for Santa tonight and he even added extra chocolate in the milk because “they like extra chocolate in the North Pole” according to him. 🙂

I’d like to wish you and your family a very Merry Christmas. It’s the most wonderful time of year for kids and grownups. The excitement of the gifts, family gatherings, Santa, and even candy is something we all look forward to. However, I do hope that at this time of year, you can reflect on the true meaning of Christmas. Why does the whole world stop to rejoice on this day? Because of the birth of one baby, and my personal Lord and Savior, Jesus Christ.

I found this paraphrase from Behind the Badge and thought he did a great job of wrapping up the true meaning of Christmas.

The Christmas Story from Start to Finish

God made one fruit tree in the Garden of Eden that Adam and Eve were not to eat from. They could eat any other fruit or plant but not from this one tree. Now the serpent was more crafty than the other animals and it told Eve that God didn’t want her and Adam to eat from that tree because then they would become like God and know good from evil and right from wrong. Eve looked at the tree and ate from it, and Adam her husband ate from it too, even though he knew it was wrong.

Now up to this time Adam and Eve didn’t have clothes, but they were not ashamed. Once they ate from the tree that God told them not to eat from, they realized that they were naked and they were very ashamed and embarrassed. They tried to hide themselves by sewing together fig leaves as clothes. They hid from God, but of course He knew where they were. He was very angry with them.

They had sinned by doing what He told them not to do. Because of their sin, all of creation changed. Adam and Eve were put out of the garden of Eden and not allowed back in. Also God told them that the punishment for sin was death and that very day they started to grow old and would eventually die.

God told them that because of their sins, even the animals would grow old and die, and that they must pay for their sins with the blood of an animal. So God took an animal and killed it to cover them with clothes. They felt terrible because all the animals were their friends and the animals hadn’t done anything wrong, yet one of the poor animals had to die so that they could cover their shame.

With all the bad news, God also gave them some good news. He promised that He would send someone to take away their shame and sin forever. He didn’t tell them when this would happen, but He promised them that He would provide this person to save them from their sins.

God did not send this person who was going to take away their sins right away. It was a long time later that God spoke to a man named Isaiah and told him to tell the people that God would still send a child that would save them from their shame and sins. This child would be a Son, given to the world as a savior and a king. He would save them from their sins and He would love them and show them how much God still loved them. [Isaiah 9:6]

Many years later God sent an angel to talk to a young woman whose name was Mary. The angel told Mary that she was being honored by God and would have a baby who would save the world from their sins and that she was to call His name Jesus. This child named Jesus was the Son that God had promised, He was God’s Son, but was going to be born to Mary so that He could save the world. [Luke 1:42]

So Mary became pregnant and while she was pregnant she and her new husband had to travel to a small town called Bethlehem. They had to go because the King had decided that he wanted to count everyone, so they had to go to where they were born. Mary and her husband Joseph went to Bethlehem and a lot of other people did too. Mary was almost ready to give birth and the trip was very hard on her, so she rode on a donkey. When they arrived at Bethlehem, they found that there were so many people already there that there was no place for them to stay.

They ended up sleeping in a barn with the animals and Mary gave birth to Jesus and wrapped Him in a blanket and laid Him in the manger where hay was that the animals ate for food. [Luke 2:1-7]

During all this time, every year the people had to kill a lamb as a payment for their sins, but when Jesus grew up, He died so that He could cover our sins once and for all and we never again have to kill an animal to cover our sins. When Jesus died for us He also came back to life after three days and now lives in heaven and helps us when we need help. [Matthew 28; Mark 16; Luke 24; John 20]

God loved us so much that He sent His Son Jesus to earth to die for us and save us from our sins. [John 3:16]

One day Jesus is coming back to earth and He will make things back to the way they were before Adam and Eve sinned. Then we will not have to be afraid of the animals anymore and they won’t be afraid of us anymore. There won’t be any more tears, or death, or pain and sadness and we will live with Jesus forever. Isaiah 25:8; Revelation 21:3-4;

I hope that God fulfills you with His promises and blessings in the new year. 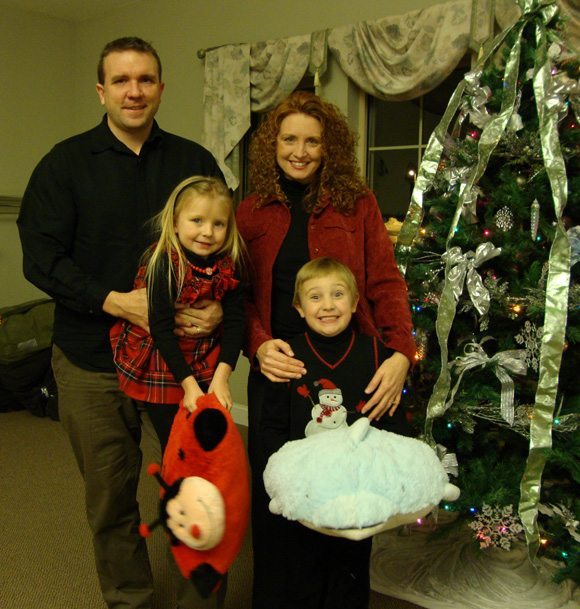