Scary Creepy Clowns have been capturing headlines across the country.  The combination of scary designs on clown-based costumes have been living hidden in America’s psyche since the first TV iteration of Steven King’s IT 1990’s Miniseries. (A 2017 movie is coming, watch out) 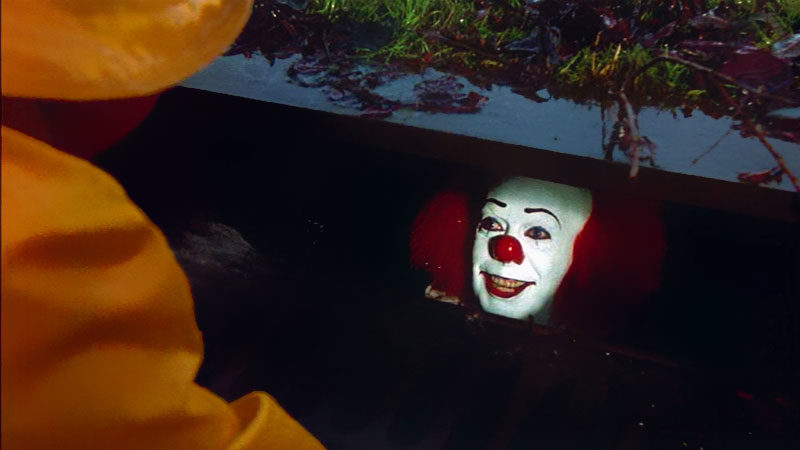 Some individuals capitalize on this fear… and it certainly makes the news.

During 8th grade lunch at Hudson Middles School, a career tech auto student wearing a clown mask and wig arrived to his program that is located next to the Hudson Middle School parking lot. This scared the children because of all of the news on creepy clowns in Ohio. No student was harmed and the Hudson Schools staff immediately took care of the situation and calmed the 8th graders. Hudson Middle School has already “been in contact with our central office administration, our Student Resource Officer, and the student’s school to help them begin a disciplinary investigation.”

Two clowns were spotted outside of Pleasant View Nursing Home in Barberton, Ohio. The nursing home went on lockdown until the police arrived. The clowns ran off before police arrived.

Colerain Township schools near Cincinnati Ohio were closed after a clown-related attack. 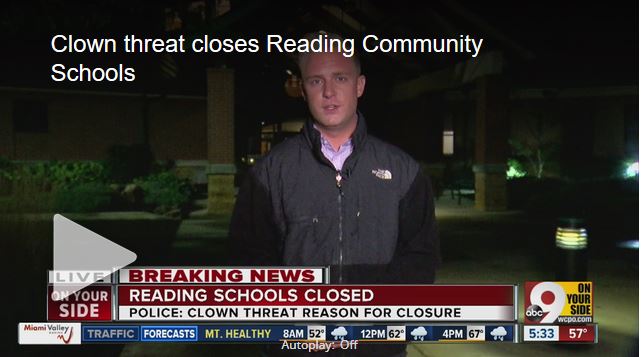 A woman was grabbed around her throat and threatened by the clown, “I should just kill you now and ‘that some students and teachers would wish they were never born at the junior and senior high school today.'”

In Warren county, a woman was says she was chased by a clown right up to her apartment door. This clown was dressed in red and white, with a plastic mask. Harassment would be the charge if they find the perpetrator.

A Warren County woman reported being chased by a clown. She called Franklin police after she got home to her Skokiaan Drive apartment, police said Wednesday.

A Warning from Auglaize County Sheriff

Firestone High School in West Akron, Ohio was incorrectly reported in social media as “on lockdown” due to social media treats on Facebook.
Akron Police investigated those facebook treats and concluded “there was absolutely no credible threat”.
-Thank you Ms. Weiss who corrected us via a facebook comment.

There was another clown sighting at an Akron School on the same day where kids reported seeing a clown approach a vacant house near Grand Avenue and West Exchange Street on their walk to school.

There were social media reports of two clowns driving around in a pickup truck near Quincey Ave in Barberton, Ohio.

Clown with Mallet at University of Akron – September 27, 2016

Clown with Mallet sighted on the University of Akron campus Wednesday night walking around the South Hall dormitory. The mallet turned out to be made of foam. The suspect was a 19-year-old student. He was investigated for inducing panci but not charged.

A clown was reported as standing near a car wash on Krancz Drive in Norton at 7:20 pm.

A clown was spotted near East Castle Drive in Barberton at 8pm. Another clown was standing around at West Hopocan Avenue and 16th Street Northwest at 11pm.

Two clowns were seen in Lancaster, Ohio. One wearing a gold suit and holding a balloon, and the other in straight black. The police of course, haven’t found these clowns. One woman, at 2am, reported that she saw a clown holding a knife. Scary.

An outright clown attack occurred in the early morning hours of September 27, 2016. A man was attacked by two clowns in the Cincinnati area town of Greenville. With his defending baseball bat stolen from him, he was hit in the neck.

Trying to figure out what they looked like behind their white painted faces, the victim said one may have been bald with black diamonds painted around his eyes, and the other had long hair.

On September 23rd, the Huron County Sheriff’s Office noted that it has received several complaints from residents in the city of Norwalk. The clowns’ intentions are not yet known… but the Sheriff’s office Certainly wants to find out! These clowns could get themselves, or someone else hurt.

Police have taken a report describing a clown holding an axe within city limits and staring at bystanders. A clown was also reported to have knocked on someone’s door. Holding a weapon alone can lead to an arrest on charges of disorderly conduct, inducing panic and other local city ordinances.

A woman reported having two clowns swinging a baseball bat at her car near Inman and Johnston streets, scaring her, but not striking her car. The clowns were gone by the time police arrived.

A fourteen year old boy on the north side of Columbus apparently evaded a knife wielding man dressed in black, donning a clown mask. The boy threw a rock at him. Police are taking this seriously.

Along Enterprise Street and roaming around campus, one clown is scaring people. Dressed in a red and blue costume and a black wig, this clown is causing many people to turn to twitter to warn each other. The Wood County Sheriff is saying that if you see someone in such an outfit, and feel in danger, call 911.

Well, the truth is, there are no clowns in Marion, Ohio.  Statements allegedly coming from the City Police Department to stay inside and ‘lock your doors’ are false.  I share this just to highlight what panic can do.

Two High school students in Troy Ohio ran into trouble when they invented ClappyAndslappy DaClown on Faceook in mid-September. A 5 minute video featuring the below masks threatened violence to Troy residents. This did not go over well. 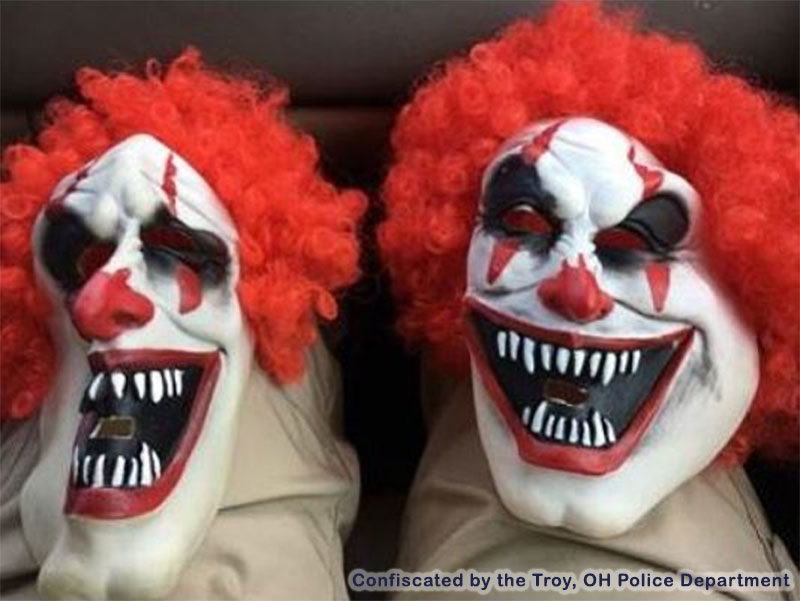 What to do about Clowns…

Dressing up as a clown is not a crime.  But inducing panic, harassment, carrying a weapon in public, breaking into property, and running at people are crimes. If you see something like this- call your police and do let them know to keep an eye out for this behavior.  Someone may end up hurt if you don’t.