International expert, Dr. Melillo, addresses Autism in his new book given to me to review and share with our readers as well as an interview.

April is National Autism Awareness Month, and one of the nation’s leading experts on childhood neurological disorders has released his third book on the subject, sharing knowledge he obtained through extensive research on the increasingly common developmental disability.

In his newest book, “Autism: The Scientific Truth About Preventing, Diagnosing, and Treating Autism Spectrum Disorders – and What Parents Can Do Now,” Dr. Robert Melillo reveals environmental exposures associated with Autism and recommends ways to protect children (even as early as the womb) from the risk factors. 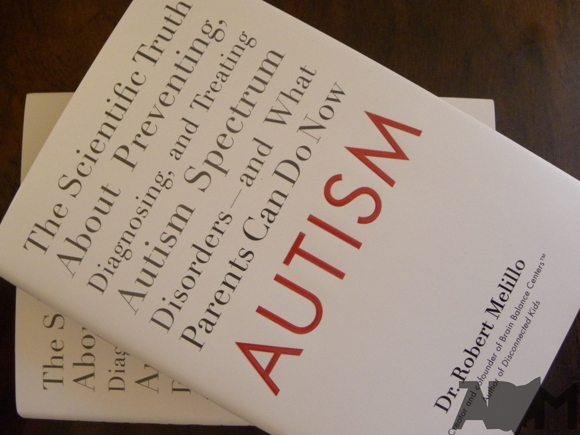 The bestselling author and educator previously penned “Disconnected Kids” and “Reconnected Kids,” which addresses the prevention, causes and treatments of brain imbalances. Dr. Melillo, who specializes in neurology, rehabilitation, neuropsychology and neurobehavioral disorders in children, is co-founder of the Brain Balance Achievement Centers and developer of the Brain Balance Program, a comprehensive approach to treating learning disabilities, including autism, attention deficit hyperactivity disorder, Tourette’s and Asperger’s.

April is recognized in the United States as Autism Awareness Month and serves as a time for medical experts to educate the public about the spectrum disorder. Now is a good time for parents and parents-to-be to pick up Dr. Melillo’s books, especially “Autism: The Scientific Truth About Preventing, Diagnosing, and Treating Autism Spectrum Disorders – and What Parents Can Do Now.” I received a complimentary copy of the new book and could not put it down. Dr. Melillo provides many facts about the autism epidemic I never knew, specifically that prevention can begin prior to pregnancy. The book answers why autism rates continue to rise and what a parent can do to help his or her child. I especially appreciate his focus on drug-free ways to reverse the condition.

Interview with Dr. Melillo on Autism

I recently had the opportunity to speak with Dr. Melillo and immediately was touched by the compassion he has for those affected by autism. It did not take long for me to recognize his commitment to reversing the impact developmental disorders have on children. In our conversation, Dr. Melillo answered several questions for Akron Ohio Moms.

Question: Why are autism rates continuing to climb?

Answer: Dr. Melillo said 1 in 50 children presently have autism, and explained the increase in cases directly is linked to the environmental factors present today.

Question: Is there anything that can be done to reduce the risk of autism?

Answer: Dr. Melillo explained many steps can be taken at preconception and prenatally to prevent autism and other developmental disorders. He recommends avoiding pesticides and estrogen, which often are found in today’s foods. He strongly urges mothers-to-be to stay away from frozen foods and consume organic produce instead. Dr. Melillo said it is important for mothers-to-be to reduce stress, exercise, eat property and avoid taking antidepressant medications.

Question: Does autism start at birth?

Answer: According to Dr. Melillo, autism begins in the womb and results from a developmental imbalance in the right side of the brain. This often results in a learning delay. Dr. Melillo explained environmental factors are responsible for altering the brain, turning off genes that should turn on to build the brain properly. He believes the genes can be turned back on, however, with the correct approach.

Question: What are the early warning signs of autism?

Answer: If infants are missing their milestones, it is a sign that autism may be to blame, Dr. Melillo said. He explained children who do not develop motor skills timely likely have a developmental disorder. Even newborns who have trouble breastfeeding, may be dealing with autism, he said. According to Dr. Melillo, if a baby is unable to equally roll over in both directions at 3- to 5-months-old, a problem with the right side of the brain probably exists. He said it is important to seek intervention as early as possible.

Question: Are we over-medicating kids for autism?

Answer: Dr. Melillo said medication could be considered on a short-term basis to help manage symptoms, but it does not correct the problem. By understanding exactly what is happening in the brain, a therapeutic approach can be taken to reverse the problem, he explained. Dr. Melillo suggests identifying food sensitivities and eliminating the allergens – such as gluten and dairy – from the diet.

For further information on Dr. Melillo and his treatment centers and approaches, visit www.brainbalancecenters.com.

“Autism: The Scientific Truth About Preventing, Diagnosing, and Treating Autism Spectrum Disorders – and What Parents Can Do Now” is available for purchase on Amazon.

Autism: The Scientific Truth About Preventing, Diagnosing, and Treating Autism Spectrum Disorders–and What Parents Can Do Now (Hardcover)

This was not a paid post. My own opinions were used based on my perceptions and experience. Thank you to Dr. Melillo who provided product for review.

Emily, a freelance journalist, is the proud mom of five children, ages 4 to 12. She and her husband have been married 14 years, moving to the Akron area for employment 11 years ago. Although both originally from Pennsylvania, the couple fell in love with Ohio and are proud to call the state “home.” Emily and her family – also including a King Charles Cavalier Spaniel pup and a Holland Lop bunny – now reside in the Hartville area. She and her family love going on adventures, game nights, reading together and exploring and playing in their big backyard. Emily likes lending a hand at her church and children’s school. She enjoys family time, Bible studies, bargain shopping, trying new recipes, exercising and beach vacations!
Sign up for our Ohio Specific Newsletter- Each Email Focused on Only our best Fabulous Local News and Ideas!