Here’s our researched list of monster sightings in Ohio over the past two centuries.  Apologies ahead- we’ve not included any UFO sightings. 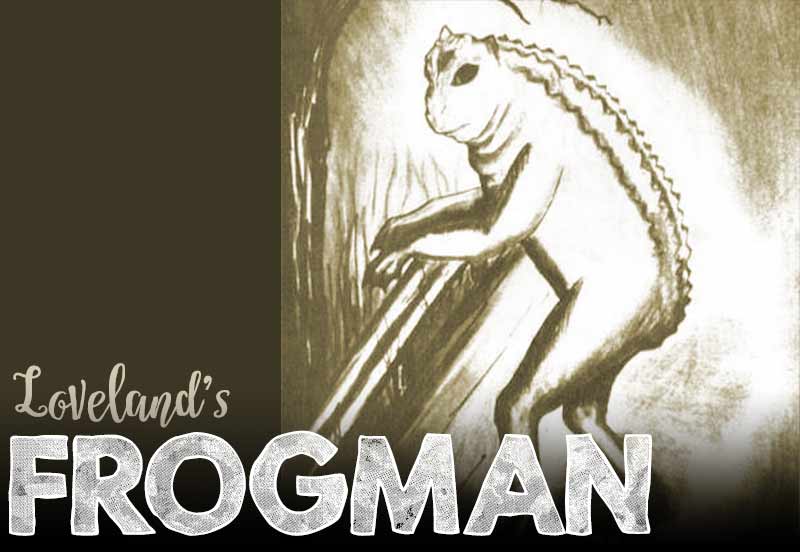 First Sighted in Loveland, Ohio in May, 1955, a traveling salesman spotted three individuals huddled by the side of the road at around 3:30 am.  The man swears he saw Leathery Green Skin, Webbed Hands and Webbed Feet. As they moved to get out of the way, he saw frog like faces, and, one of them holding a stick that was showering the three frog men in sparks.

By itself these would be the statements and drawings of someone under the influence… but other witnesses have ALSO seen similar 3-foot tall frogmen near Loveland a road that runs parallel to the Miami River.   Of these several witnesses, several were police officers, and have come within mere feet of the animals.  Never finding one dead, the frogmen often jump into the Miami River.

Located on the Ohio River across from Point Pleasant, WV, Gallipolis boasts hundreds of sightings of ‘the Mothman’- a winged creature with low set big red eyes,  human like legs, murky gray skin, 5-7 feet tall, and produced a humming sound while they flew.  Others described a brownish silver man with glowing red eyes heightened to 10 feet tall.

The Wyandot Indian Oral history contains many references to vampire like creatures that came out on foggy days. They stole children, stole already hunted game and blighted crops. The Wyandots called these “Flying Heads”.

The early 1900s also has a share of large birds with 12 foot wingspans. During World War I, “Bird men” with dark reddish Feathers were seen long the river- and children were kept indoors.

The 1966-1968 series of sightings in Gallipolis were corroborated by hundreds of people. Read More about the MothMan.

The Ohio Grassman – our Bigfoot

Named the Grassman in Ohio, the infamous,  well-traveled & hard to photograph monster at large is bigfoot. There are dozens of sightings across the state- from Alliance to Coshocton County to Dayton to Kenmore and nearly every area in Ohio besides the Summit Mall Parking lot in Fairlawn.  For the purposes of example, let’s focus on just two stories, shall we? 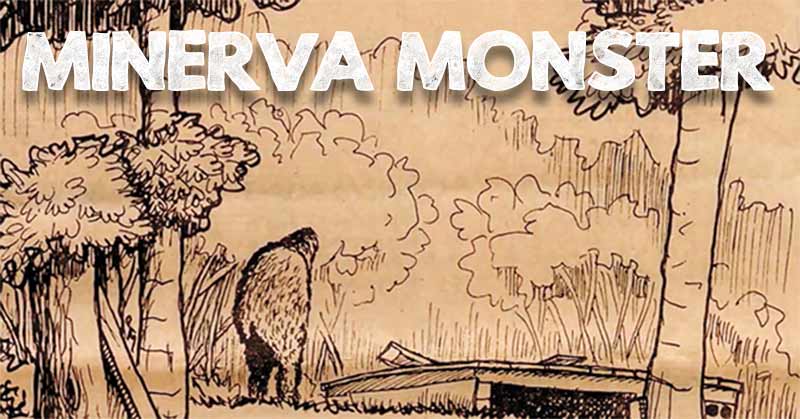 At 7 feet tall, and with multiple witnesses, this is Ohio’s best known Bigfoot Encounter.

It just stood there. It didn’t move, but I almost broke my neck running back down the hill.

This no-neck creature continued to appear to the family- sometimes picking through garbage, sometimes near an old abandoned mine, and others while protecting what looked like a pair of cat like animals.  When the animal peered into the kitchen window and sent several women into tears of fear and stoked a search effort.

Several additional sightings and sounds were recorded around 1978 in Paris Township.  Read More about the Minerva Monster.

It’s a blood-chilling sound. A curdling sound. It will scare the hell of out you. 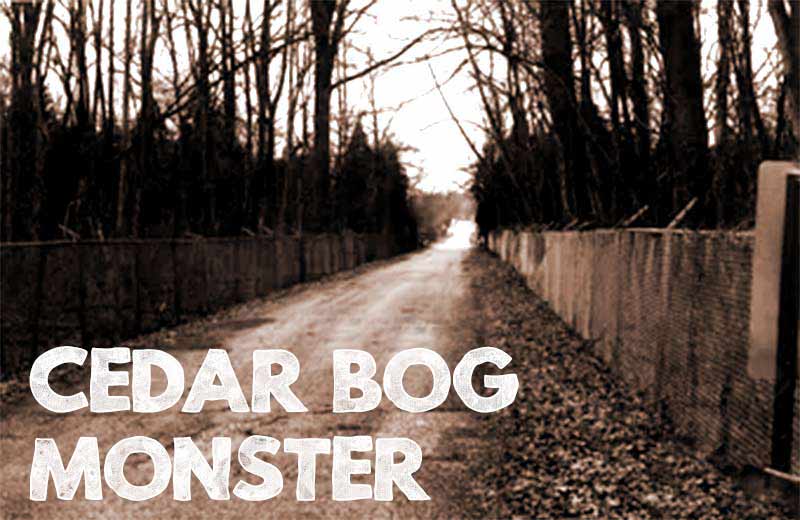 About two miles south of Urbana, Ohio, you can find the Cedar Bog Nature Preserve. This preserve opened to the public in 1942- and the inbound public interest flushed something out of hiding.

Locals started seeing a large, hairy, ape-like creature near Woodburn Road (Woodburn bisects the Park).  This could certainly be our loved Ohio Grassman.

Now, like anywhere else in the state, sightings are one thing, but two things happened that add to the mystery:

A barbed wire fence was installed around the park a few years after it opened. ‘To keep the dear off of the road’ Residents at the time were highly suspicious of the fence, and were suspicious that the fence did more than steer deer from traffic.

In addition, and in 1945, three teenagers on a camping trip near the bog disappeared.

Reports of screams and the feeling of being watched are often reported to this day.

Known to Terrify Visitors to Charles Mill Lake near Mansfield, Ohio for over 50 years, the Orange Eyed Monster has been seen in 1963, 1964 and 1991. The monster is said to be 11 feet tall (much taller than any big foot creature!) and 1000 pounds in girth. 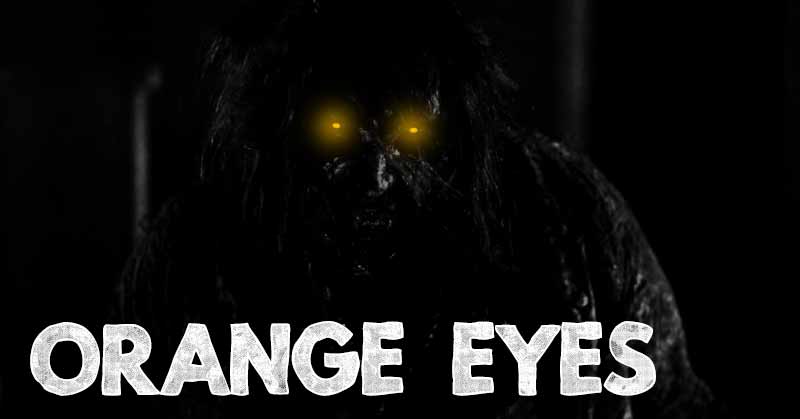 Seen by many eye witnesses, and the cause for a ‘monster hunt’, many residents believe the work is due to an old hermit waving a pair of bicycle reflectors on a stick.

Read More about the Orange Eyes.

Local Lore suggests that the Orange Eyed Monster Originated from a Tunnel underneath the Riverside Cemetery in Cleveland, Ohio, about 70 miles away.  How the animal decided to move to Mansfield, this writer does not know.

Occupying the same region and with references and sightings often confused, the Charles Mill Lake Monster was seen only once in March 1959 by three local youths near Ruggles Road close to the Charles Mill Reservoir Dam. 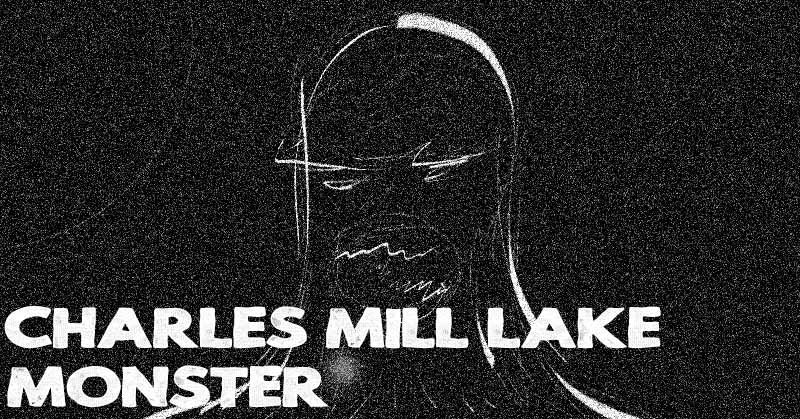 Described as a strange, 7 foot tall arm-less humanoid with glowing green eyes and webbed feet, the beast came up to scare the young men as it rose from the black water in front of them. This bizarre and unique Swamp Thing has not been seen since.

The day after the encounter, Local Authorities did confirm the existence of tracks that resembled those of footwear worn by skin divers.

7. The Giant Salamander of Crosswick

Located south of Dayton near Waynesville, the small gathering of Crosswick, OH was certainly a small but settled provincial town in May of 1882. As the story is reported, two young boys were fishing and were attacked. Carried off by ‘snake’ with legs, several men arrived on the scene and rescued the boy as he was pulled into a tree trunk 26 feet in diameter.

Armed with axes, the men hacked through the tree and scared out a thirty foot long animal 16 inches in diameter with four foot long legs, a forked tongue and large yellow spots all over its scales.

Standing erect in anger before it ran away through tail propelling power, the animal stood 12-16 feet in height when erect and ran off like a racehorse, never to be seen again. 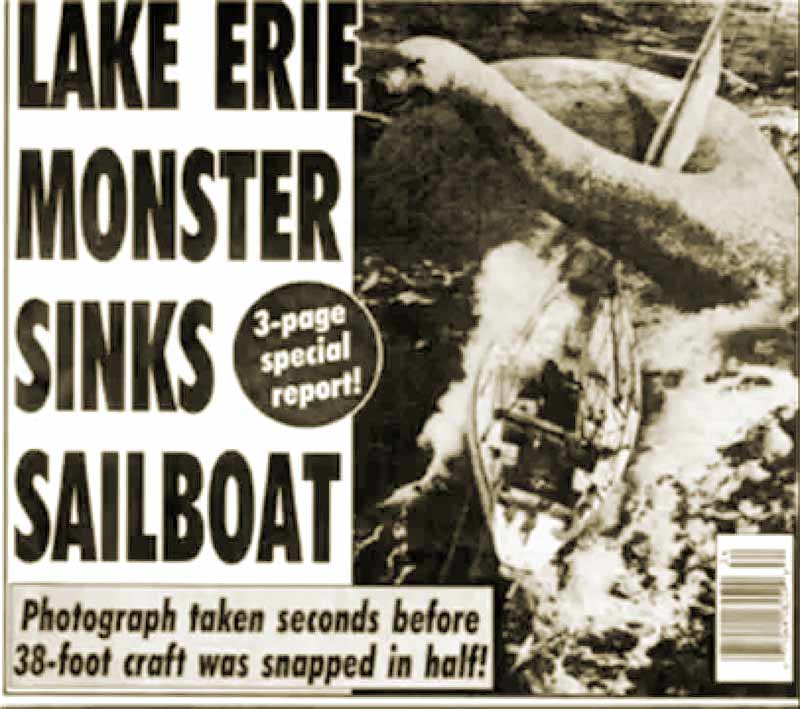 Culminating to a heightened flurry of reports in 1990, South Bay Bessie is either Huron’s Ohio’s favorite faux carnival attraction, or a 20 foot serpentine monster with a large round head.

But published stories existed 92 years before hand in newspaper articles from the Sandusky Register in 1898, and the first non-native sitings as early as 1817.

A 1931 hoax culminated in a dead South East Asian Python being found beaten to death by two men with carnival connections.

Others believe that Bessie is actually an overgrown Sturgeon- a fish that CAN reach lengths of up to 20 feet.

Spotted in 1997 in Dunkinsville, Ohio near Portsmouth, A large grey creature with long arms, a short tail and covered in hair was spotted by Ms. Debbie Cross. Her reports said the monkey like creature walked on its knuckles and had flat, rounded feet. Other reports from around the county can confuse these with kangaroos because of their jumping gate. – Wikipedia Article

Earlier, in 1875 in what is now the Lake Vesuvius Recreation Area, there is a story of a “devil” creature that harasses workers in the iron mine and nearby smelting furnaces. The creature had short legs, a long black tail, and a thin body. Reported in the Ironton Register, March 11th, 1875.

Speaking of Kangaroos, Ohio appears on lists of states where Phantom Kangaroos have appeared, although no specific location or time is available (but reports in the dozens?). Phantom Kangaroos are mean, ghostly, and have a tendency to attack pets! Apparently this published book Mysterious America has information on Phantom Kangaroos in Ohio.

Speaking of Carnvial Pythons, one Summit County Exclusive makes our list.  The animal is not specifically fantastic, but the story is!

IN 1942, a circus wagon tipped over while riding near the Ira Road Cemetery in Bath (think today’s CVNP). This Cole Bros’ Circus wagon contained live animals… And as the story goes, two large snakes escaped. One was later killed in Doylestown, Ohio on the other side of the county.

In 1944. eccentric Robert Bordner published a story in the Cleveland Press, leading to many sightings sworn not to be hoaxes throughout Boston Township, his hometown.  (Peninsula is in Boston Township)

Would the python have died, or could it have survived in the many caves dotting the Cuyahoga Valley National Park?

This writer has personally met a believer in the Python, but debunk it quite readily as black drain pipe was found in the same area:)

Read a personal account of a hunt for the Peninsula Python. 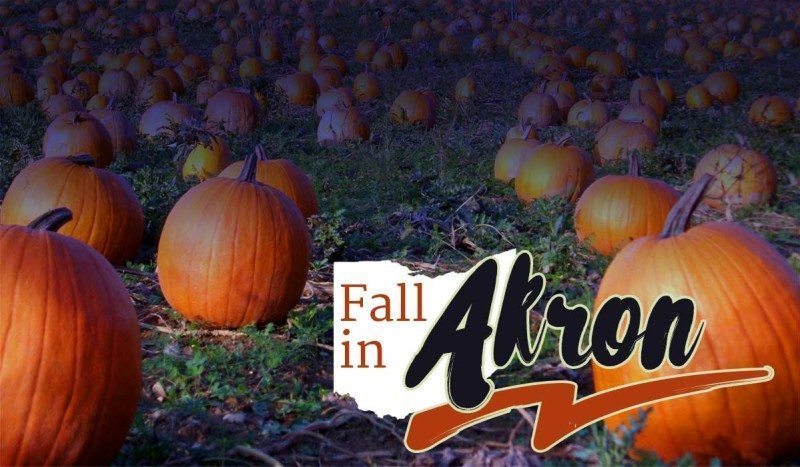