The last thing my kids want to do when they are sick is get their temperature taken. It shouldn’t be a big deal but when they are sick, they get easily annoyed and don’t want to be bothered with a thermometer. That is why I’ve been using Exergen TemporalScanners for years.

The  improved Exergen Smart Glow TemporalScanner™ offers even more features to make it even easier to take a temperature.

I love using my TemporalScanner because it means I don’t have to wake up a sleeping child to take their temperature. The new soft-glow display makes it even better because now I don’t even have to turn on a light to see the display at night! 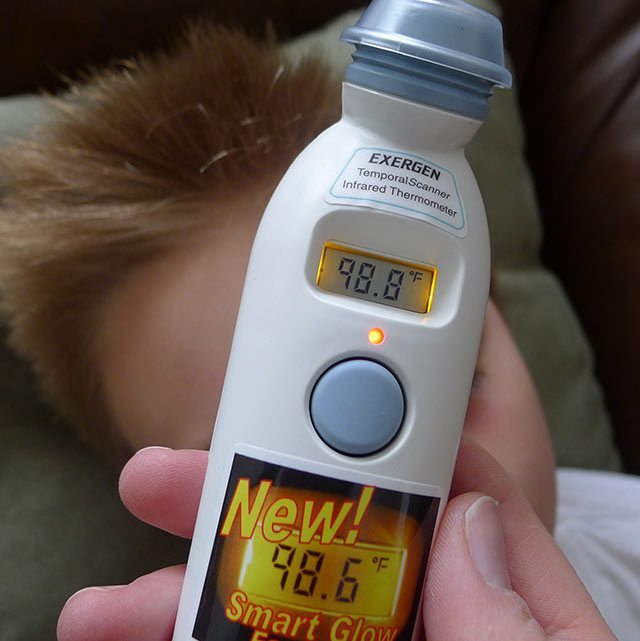 It is hard to keep track of temperatures but important when monitoring a child’s (or adult’s) fever. The new 8 Temperature Memory features allows you to track and better monitor a fever.

While using the TemporalScanner, it will beep and a red light will flash while it is scanning for the temperature.  Now, you can put it in Silent Mode to avoid waking up a sleeping child.

Now you can choose if you want to take the temperature in Fahrenheit and Celsius . I think I’ll stick with Fahrenheit but it is a nice option to choose.

Beyond the improvements, using a temporal artery thermometer like the Exergen Smart Glow TemporalScanner is the easiest and most accurate way to take a temperature. It is doctor recommended for the entire family. It is the kind of thermometer used more than one billion times annually at hospital and clinics.  It takes 1,000 readings per second, computing the most accurate reading possible.

To use the TemporalScanner, you gently stroke across the forehead for a consistent and accurate measurement. The temporal artery is connected to your hear by the carotid artery that direclty leads to the aorta. The temporal artery is the only artery close enough to the skin’s surface to get an accurate measurement. The TemporalScanner is the easiest and gentlest method of checking a temperature over oral, rectal, underarm, and in-ear thermometers.

Get a $5 rebate when you print this rebate form and mail your barcode from the Exergen Temporal Scanner TAT-2000C now through December 31, 2014.

You have the chance to win the Exergen Smart Glow TemporalScanner.
a Rafflecopter giveaway

30 Day Winning Rule applies. For complete contest rules, please see our Contest Statement and Blog Disclosure. Contest ends at 11:59 pm EST on December 10, 2014 when a winner will be drawn at random. I will notify the winners and they will have 36 hours to respond or another winner will be selected!

This was not a paid post. All opinions and views are my own. Thank you Exergen for providing the product for review and giveaway.