My husband and son went shopping the other day at the mall. When they came home, my 5 year old son couldn’t wait to tell me about a super cool robot toy that was actually a dinosaur. He went on and on about this toy they saw at Radio Shack. We haven’t really shopped much at Radio Shack for toys but I knew it must be more than just a toy if it was from there. My husband has an electrical engineer degree so when he showed interest in it as well, I knew it must be much more than a simple toy. We were thrilled to get the opportunity to review Blazor from www.ILoveRobots.com, the only interactive part robot, part dinosaur on the market.

We have many, many dinosaur toys in our house since my son has liked dinosaurs since he was about 2! We have all kinds from tiny to very large that roar and move. We’ve never seen or experienced anything like Blazor. He’s in a dinosaur class of his own.

This dinosaur robot has 4 different modes of play, so your kids won’t get bored of the same 2 tricks that other toys do.

This is a super-fun toy, no wonder my husband and son were excited about it. Blazor is full of personality! Blazor has a mind of his own and it is a little wild, just like a real dinosaur. He growls, roars, screeches and moves like no other toy we’ve seen. Blazor is built for speed and maneuverability through animotion technology.  This is by far the fastest toy we have in the house, fasting their remote control cars! His hind legs are almost like wheels, giving him a unique appearance and unique abilities.

When playing with Blzaor, you never know where he will go, unless you are using the direct control mode. One thing is for sure, Blazor knows exactly where he is going and doesn’t let thing in his path slow him down, he just avoids thing in his path. Even if you step right in front of him, he responds within a second. He’s a super bright robot.

Blazor has a mind of his own, he responds to not only his environment, obstacles, and other robots but also to you. If you tap his jaw, he will stop and settle down. If you hold his jaw shut, he will wiggle free and spin out of control, roaring and growling. Be careful, he is 1/2 dinosaur!

Be sure to grab enough batteries when you give Blazor as a birthday present, Christmas gift, or other special surprise to your 5 year old and up. He takes 4 AA batteries and his remote control takes 3 AAA batteries. We’ve not had to change his batteries yet and he’s been running hard for 3 weeks so far.

I highly recommend the Blazor Robot Dinosaur remote control toy to anyone ages 5 and up! It is an amazing fun toy with lots of different ways to play, you never know what Blazor will do! Blazor is great for kids that love dinosaurs, likes remote control toys, or interested in robots. You can buy Razor at your local Radio Shack or Toys R Us. He can also be found on Amazon.com. 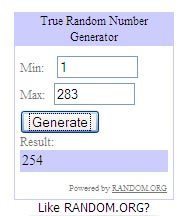 ILoveRobots is giving you the chance to win Blazor Robot Dinosaur! Win it for your kids or the kid in you that loves robots!

Contest ends at 11:59pm EST on February 8, 2011 when a winner will be drawn at random and announced the next day. When commenting, please include your email address (not visible to public). I will notify the winners and they will have 36 hours to respond!

This was not a paid post. My own opinions were used based on my perceptions and experience. Thank you to  ILoveRobots who provided the products for review.