There are so many live shows to choose from in Las Vegas. If you have children, you’ll be limited. The one family-friendly show you must see is Mystère by Cirque du Soleil. Adults and children alike will be mystified by incredible acrobatic performances, the intriguing story, and out of this world scenery and setting.

Mystère has its own theater built in Treasure Island Hotel & Casino. Every seat in the house is a good one in this intimate theater. We arrived about 1/2 hour early and the line was already long. Thankfully it moved fast! 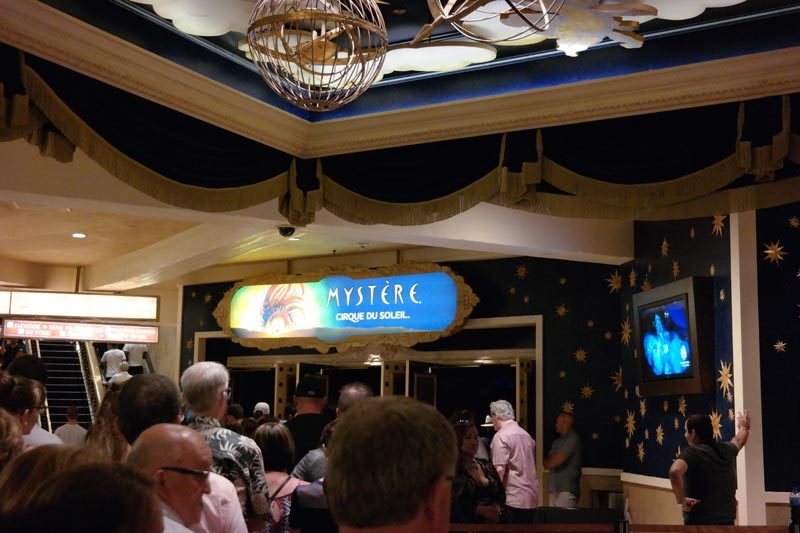 Before the Mystère by Cirque du Soleil began, there was an older clown that entertained the audience. He acted like he was helping people to their seats and would take them all the way to the front row only to then lose their tickets in a helium balloon or take the people back to where he started from. It was hilarious. He also stole popcorn from some people and gave it to others – or threw of into the crowd. My husband was the victim of receiving an entire bucket of popcorn on his head. It was hilarious! To our delight, he came and went throughout the show with various clown gags and audience participation. 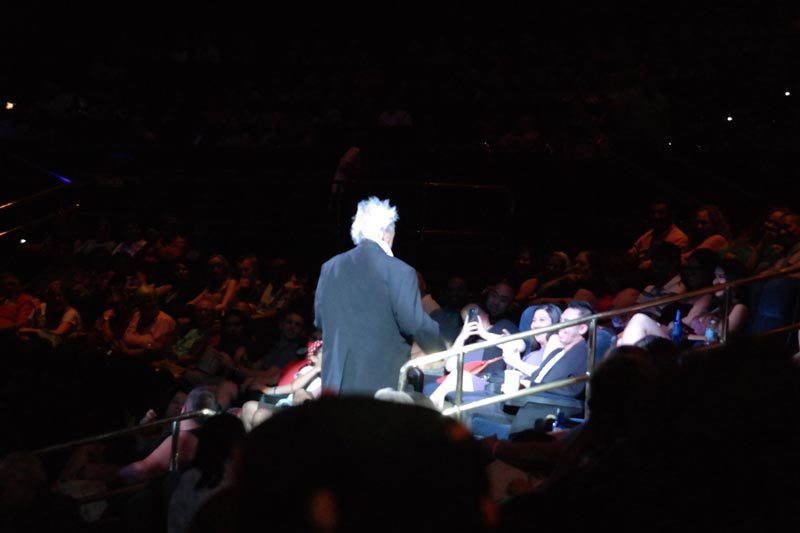 Parking at Treasure Island is free, which we appreciated. When we walked to the elevator, we saw a creepy guy in makeup with high eyebrows, I rushed my kids to another entrance. Another family did just the same. There are weirdos in Vegas, you know. It turned out that our weirdo was actually one of the make characters in Mystère! ha! How we wish we would have known! 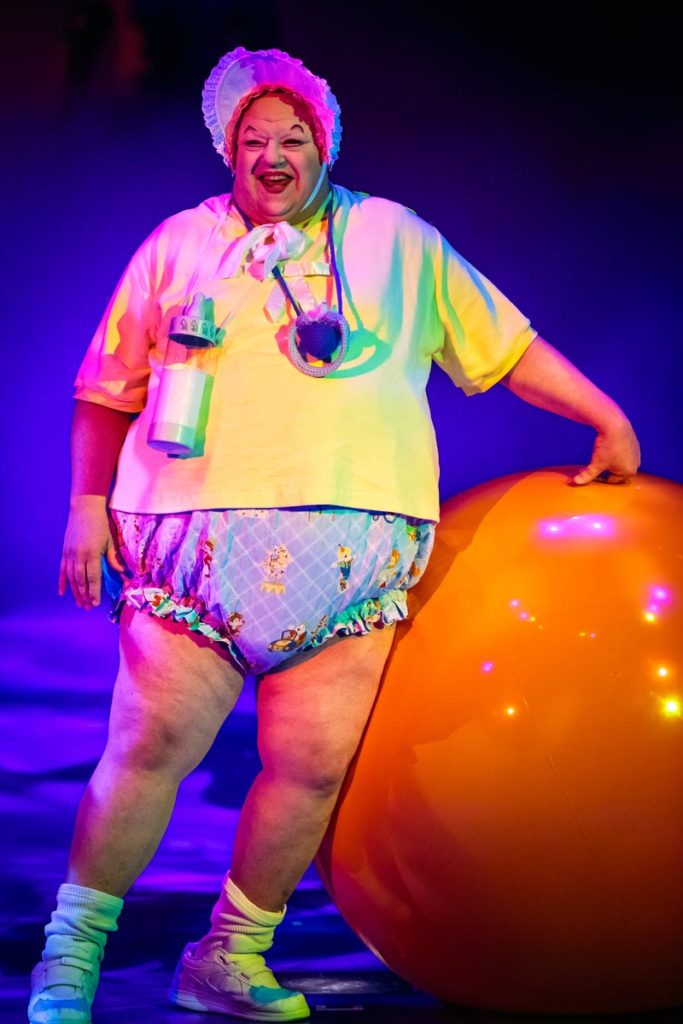 The story line of Mystère follows two enormous babies as they process a mystical world around them. It is definitely not world as it was filled with unique creatures! I felt like we had a peek into a very odd dreamworld throughout the performance.

The stage was always alive with athletic acrobats, dancers, musicians, brilliant colors, and unique creatures! There is so much going on that you can hardly take it in. Every seat in the house is a good one as the theater was built for this specific show. 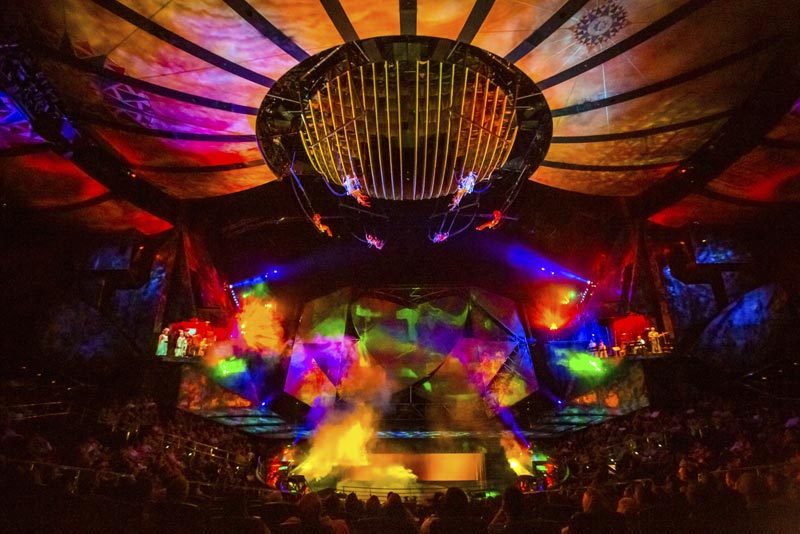 One of our favorite acts involved two-faced people who wore masks on the back of their heads. They climbed and jumped up and down poles with amazing skill and strength. It looked like their heads were on backwards as we watched them climb up the pools – with a face always pointing toward us. You wouldn’t believe the absolutely amazing feats of strength, flexibility and grace this act portrayed! It was incredible and unlike any circus act I’ve ever seen! 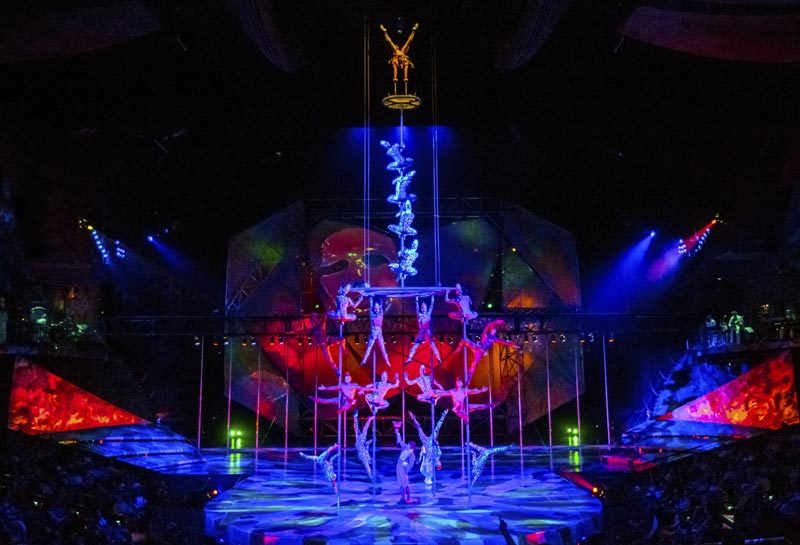 We always love the silk dancers as well. There were several that would climb, swing, and fall with the silks with incredible grace and athleticism. 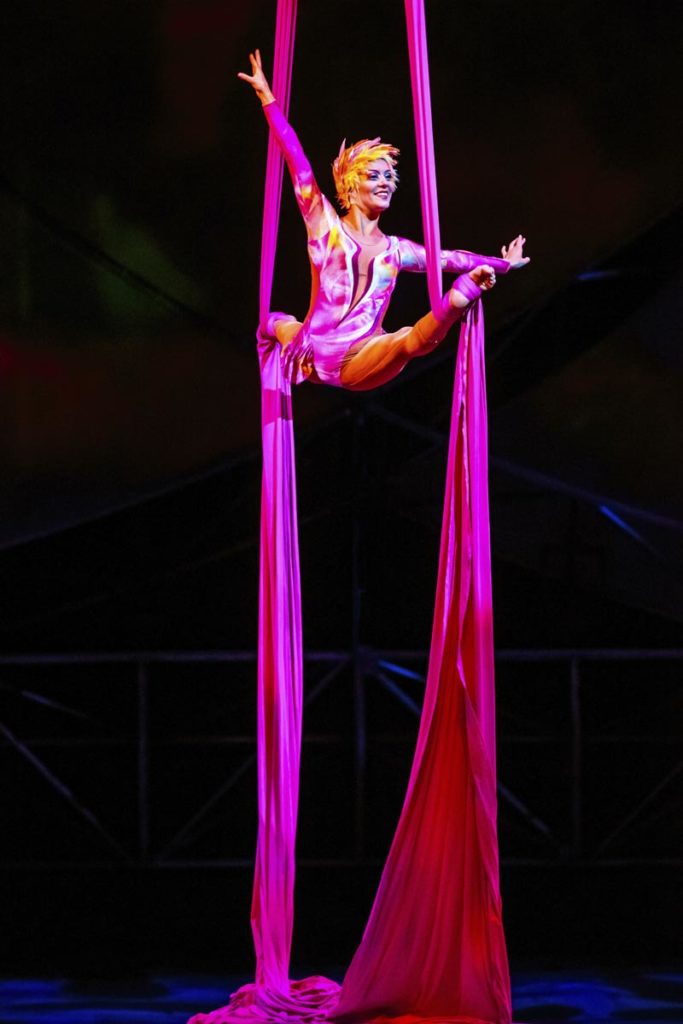 There are several trapeze, see-saw, and traditional acrobat performances throughout the show. The costumes and characters were in line with the  out of this world, dream-like theme. The enormous babies would watch and walk around the acts throughout the show, usually in a state of awe and wonder – which is pretty much how we all felt!

The hand-to-hand strong men act was absolutely amazing. The strength they displayed was unequal to any I’ve seen. At one point the entire audience gasped when one performer had all of the weight of both men on just one calf muscle. It was so extreme, I can’t even explain it or think about it! 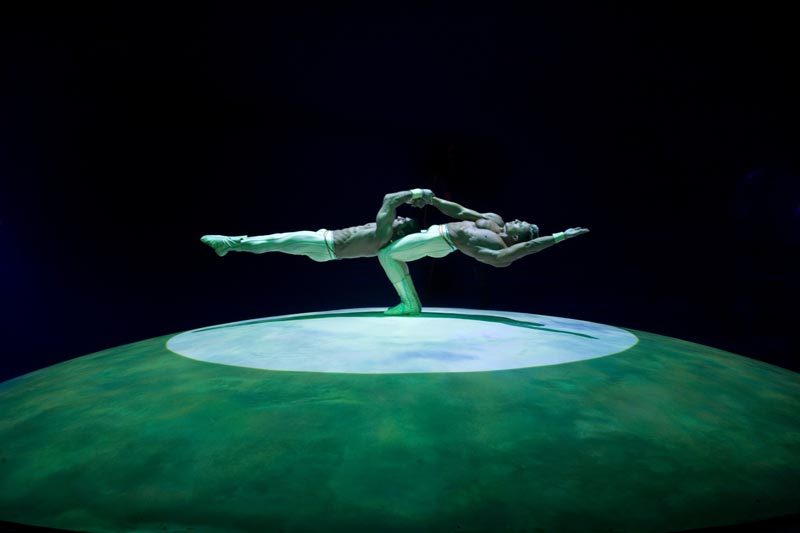 Like all Cirque du Soleil shows, the live music and singing was brilliant. The two female singers had sang in such an airy way that evoked such emotion that I had my eyes on their performance rather than the acrobats. What talent Mystère by Cirque du Soleil in Las Vegas hosts!!! The entire performance from the pre-show to the finale will captivate kids and adults alike. This is one Las Vegas show that is safe for the whole family to enjoy.

Buy tickets now, starting at $69 each.

This is part of our Kidifornia Family Adventure series.

Read all of our Cirque du Soleil reviews here.