I’m not a tallest girl by any means but there is always something really neat about standing next to, on or inside of something that is larger than life. I went to the Grand Canyon when I was about 9 years old and ever since then I feel like BIG things make me feel grounded. 🙂 Here are 20 unusual sized things in OHIO that I can’t wait to see with my family.

In Dublin there is a whole field of tall concrete corn ears! Each ear of corn weighs 1500 lbs, isn’t that crazy? There are 109 human-sized 6 ft. 3 in. tall ears of corn that stand upright in rows. The field of corn symbolizes the history of the farming legacy of the area.
Located at: Frantz Park 4995 Rings Road 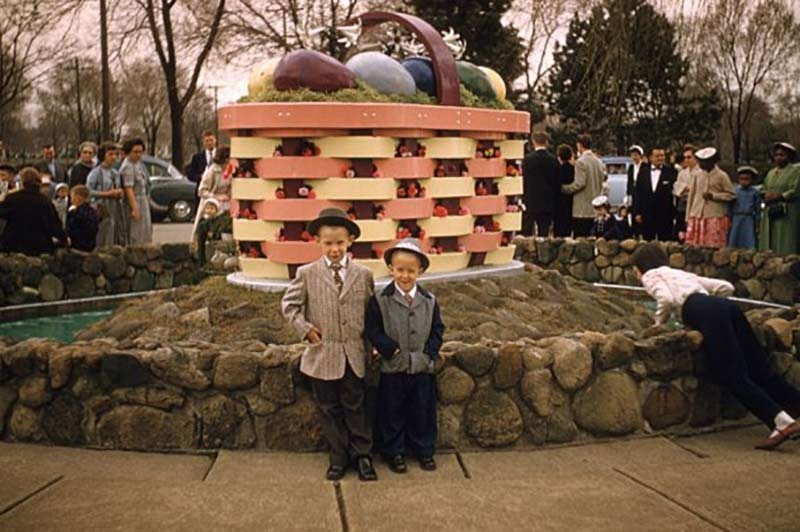 There are two Giant Easter baskets in Lorain’s Local parks. The larger is in Lakeview park and is 9 foot tall and 10 foot wide, the 2nd smaller basket is located in Oakwood Park. The baskets are made of stacked concrete, and are painted bright colors. Locals love to visit around Easter for photos, but I think these baskets would make for a cute photo anytime!
Located at: 2047 E. 36th Street and West Erie & Parkview & Lakeview Dr. Lorain, Ohio.

4.  Basket Of Apples – a Longaberger Favorite 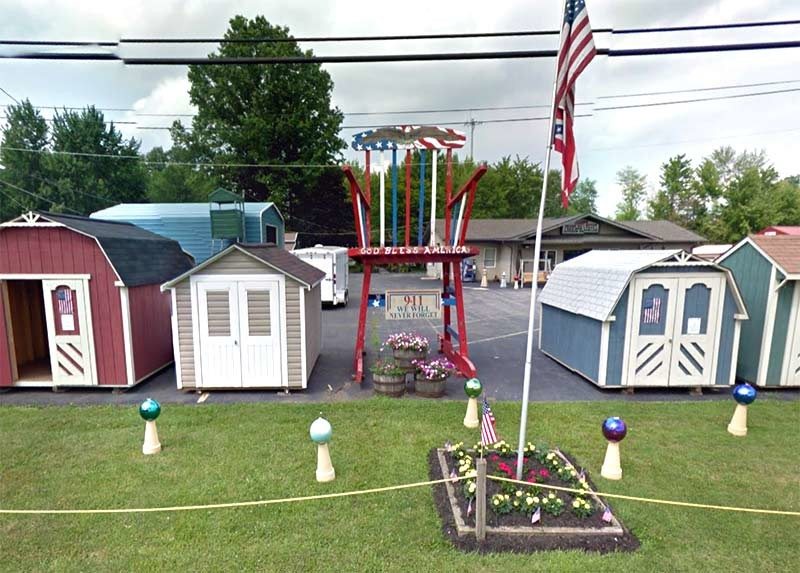 Outside of James Income Tax Service is a giant Rocking Chair. It’s painted in an Americana Theme. Stop by and Check it out.
Located at: 4118 Parkman Rd. NW Warren, OH 44481

Sitting outside of Troyer Furniture is a giant Adirondack chair. The color changes to fit the seasons or show support of state sports teams and most recently to support Breast Cancer Awareness in October last year. I think this is such a neat way to show support and is a fun attraction.
Located at: 985 West Main St  Sugarcreek, OH 44681

7. Can Of Tomato Soup at the Napoleon Campbell’s Factory

I kid you not! Did you know Campbell’s Soup has a plant here in Ohio? I had no idea, but someone got the great idea to paint the water tower on the property to look just like a can of soup! I love it!
Located at: 12772 State Route 110, Napoleon, OH.

In Wadsworth near the end of June they hold a 5 day celebration. It starts with a world class parade and they light a 20 foot blue tip match! These historic strike-anywhere blue tip matches which were once manufactured in Wadsworth. The matchstick is only out during the festival itself. The festival is coming soon! Get more Information here!

Sophia Ryder of London, England was commissioned to make this piece in 2001. After making its debut in Holland it has served as the whimsical centerpiece for Ballantrae’s park (on loan to the City of Dublin).
Located at: 6350 Woerner Temple Rd, Dublin, OH 43016

This 52 foot tall statue of Jesus is at Solid Rock Church. This one was built to replace the old one which I believe was struck by lighting and caught on fire in 2010.
Located at:903 Union Rd. Lebanon, Ohio 45036

While this piece once resided in front of a church and used as proof that evolution didn’t happen, as the horseshoe crab currently looks the same as in its fossils. This Horseshoe Crab is huge! You can actually walk inside it. In 2015 the crab was put up for sale and was purchased by Ben Sexton. It was moved 25 miles east to Hillsboro, and reassembled it next to Highway 124.
Located at:One mile east of downtown Hillsboro, on the south side of Hwy 124.

Did you know Ohio has a giant Cuckoo Clock? I think this is one of the coolest “Giants” on my list! Head out to Sugarcreek and check it out. From 9am-9pm this 23 foot tall and 24 foot wide, clock complete with innards chimes every-half-hour. The cuckoo bird pops out and you enjoy Swiss polka music playing as the band comes out and the couple dances.
Located At : 100 N Broadway St, Sugarcreek, OH 44681

I think this is the most well know Giant in the Cleveland area. This giant stamp reads FREE. Resting on it’s side in Willard park. Made from Steel and Aluminum and measuring 28 ft 10 in x 26 ft x 49ft. This stamp is HUGE! While it was commissioned in 1982 is wasn’t Gifted from BP America, Inc. to the city of Cleveland until 1991. You can read more about it’s history here.

On one side of the Columbus Washboard Company’s building is the worlds largest washboard. They have been hand-making washboards since 1895!
Located at: Gallagher Avenue in Logan, Ohio.

This 12-foot tall portrait of the Wyandot Native American Chief Leatherlips, was created in 1990. The head is comprised of various sizes of native limestone stacked and mortared. It is open on the top and the stones extend back along its sides, creating a small enclosure that offers a beautiful view of the river, the sunset and the amphitheater.
Located : Scioto Park 7377 Riverside Dr. Dublin, Ohio.

In Northwest Ohio, this Giant Bull was saved from a garage sale of sorts at Bowling Green University in the 1970s, and today it is decorated for the holidays.  Some claim it as their mascot for a secret group of scuba divers that make use of a nearby abandoned Quarry… However I assume this bull does not swim.
Find the Bull on SR 224 in Gilboa. 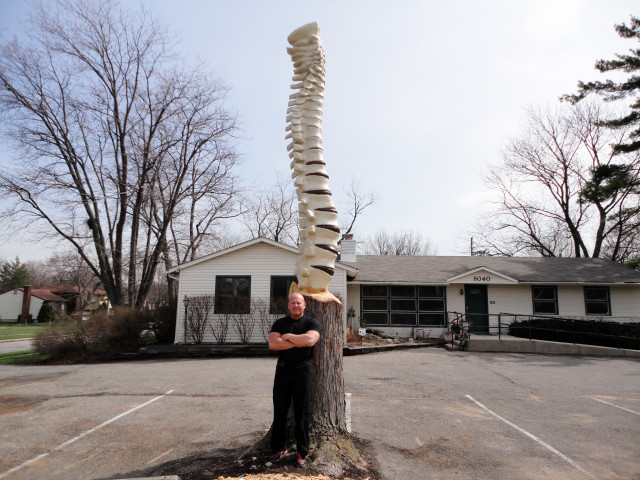 Dr. David T. Ryan had an infested Silver Maple tree in front of his Chiropractic office. Instead of having it cut down he had it craved to look like a GIANT Human spine. Measuring 25 feet tall this spine has all 24 vertebrae.
Located at: Columbus Chiropractic Center 6040 Cleveland Ave, Columbus, Ohio.

Standing 50 Feet tall this gorgeous statue is adorned with over 450,000 hand laid tiles and took over 10,000 hours to construct and resides on the ground of The Servants of Mary Center for peace. The grounds are open daily – April-December 10am-10pm and January-March Daylight Hours. There is also a Chapel and Gift Shop Tuesday-Saturday 10am-5pm Sunday 12pm-5pm.
Located at :6601 Ireland Road, Windsor OH 44099

On May 2, 2014 Playhouse Square unveiled the “GE Chandelier,” the world’s largest, permanent outdoor chandelier. This 20-foot tall chandelier graces the intersection of Euclid Avenue and East 14th Street. It is suspended from a 44 foot tall steel structure and is adorned with more than 4,200 crystals.

There are more GIANTS around IF you know of some that we should check out, please share with us in the comments below!