The entire movie is retold in this 2 hour performance, scene by scene. The show started off with Mickey Mouse, Minnie Mouse, Goofy, and Donald Duck introducing the story. They added the excitement to the show as only Disney characters can!

The story unfolds as Andy packs up his toys before he went off to college, talking founding about each one before the toys come to life.

As the toys were coming to terms with their new fate of the attic, they were remembering the good times from the first 2 Toy Story movies. Rex is seen trying to defeat Emperor Zerg in the video game. Zerg was huge and shot fire at the toys, which my kids loved! Buzz Lightyear’s grand entrance to the show had him flying down from high above to help Rex finally defeat Zerg. This was an excellent scene filled with fire, smoke, action, and flying – what else could a kid ask for?!

Woody recollected when Buzz thought he was in an alien spaceship and not a vending machine. They reenacted the scene where The Claw grabbed him and Woody up. The aliens were a big hit with the audience. My pictures were too blurry but here’s a great image of the scene.

The toys knew they were going to be packed up and Jesse was feeling sad. She was remembering all of the good times of being played with and of Woody’s Roundup gang. This was a lively, cowboy type scene that I just have to share with the video below.

Then, the toys arrived at Sunnyside Daycare. It seemed like a super place where kids would always play with them…

Barbie was still feeling really sad that she was the toy donated by Andy’s sister. Then Lotso and Ken showed up. The audience was excited to see Lotso the purple bear, he is a popular guy, too bad he ended up bad in the movie.  For Ken and Barbie, it was just as magical as in the movie when they met and danced the first time!

It didn’t take long for the enormous kids to come rolling in. I wondered how they would portray the kids coming in to play with the toys. They had 15-20′ cut outs of kids roll in to put the toys in their place with loud sounds of kids playing. The scene was short but the toys were not happy about Sunnyside Daycare and requested to move to the caterpillar room. Lotso showed his true colors.

Luckily, Woody was already on the way to help save his friends. His heroic efforts started with his kite flying out of Sunnyside. Feld Entertainment put on a fantastic show. They incorporated flying numerous times with Buzz Lightyear, the green army men, Woody, and the Claw picked up several people throughout the night. Kids loved each and every time! It really gave the show a lot of action all around instead of only front and center on the ice.


One of my favorite scenes was Ken trying on all of his clothes for Barbie. It was so cheesy, just like the movie. They had 3 or 4 Kens because he was changed in a flash each time. I loved that Barbie was so clever to trick Ken in order to capture the key and Buzz’s instructions to save her friends. This might be one of the only times Barbie is portrayed as a powerful, in charge woman.

After Woody and Barbie free their friends, they try to re-activate Buzz from demo mode. Accidentally, they put Buzz in Spanish Mode. Buzz promptly leads Jesse in a flamenoc-style dance. Great scene! From there, Lotso and his gang try to capture the toys again and send them to the fire on the conveyor belt. Lots of fire and smoke in this scene to the delight of my 5 year old son! Luckily the claw arrives in time to pull them free as a giant hand reaches out and pulls Lotso away.

Then comes the sentimental part. The toys get back to Andy’s box and Andy looks at the note that Woody wrote on their box. It said to donate to the girl down the street. He took out each toy from the box to say his goodbyes while remembering the good times. Then, he sees Woody in the box. He’s not suppose to be in there of course but Andy decides it would be best not to split up the toys. With each toy that Andy picked up, the character was highlighted on the ice in his “toy pose”. Wow, the show really captured the emotions of Andy growing up, the toys having such value to Andy, and the hope they will have at their new home.

From there, it’s all song and dance with an exciting finale with all of the toys and the Disney crew.


If you liked Toy Story 3, the movie then you are going to love the LIVE production of Toy Story 3 with Disney on Ice. Even if you’ve never seen the movie, you can enjoy Disney on Ice Toy Story 3 as it retells the story in a fantastic, larger than life way. The characters were flawless in their performance, the costumes were amazing and right on to the point where you forgot they were people acting and not the real toys, and the skating was choreographed with exciting music.

When  you use the coupon code below, a family of 4 can enjoy this fantastic Live show for just $44! It is a great price for a family outing. It’s comparable to a night out at the movie theater with your family – price wise. However, a night out at Toy Story 3 will be one filled with awesome memories that can only be found with a Disney production.

See Buzz Lightyear, Woody, Jessie and the Toy Story gang at Disney On Ice presents Disney/Pixar’sToy Story 3 for only $11 each when you use the AkronOhioMoms.com coupon code. OR, reserve your tickets today at disneyonice.com. The Disney on Ice Toy Story 3 Coupon Code is for the $15 and $21 price level tickets. Enter the Disney on Ice Coupon Code MOM2 in the Advance or Promotion Ticket Selection Box and enter quantity. (Limit 4) When you click on ‘Price Details’ on the Shipping page, you can see the $11 MOM ticket outlined.

Discount: Flat $11 ticket on all performances

Restrictions: Not valid on Front Row or VIP seats; no double discounts; limit 4 per order

There is plenty of parking around the Quicken Loans Arena for just $10 each.

My kids at Disney on Ice Toy Story 3

This wouldn’t be a mommy blog if I didn’t show off cute pictures of my kids. We had a really fun time tonight at the show. It held the attention of both my 4 year old girl and my almost-6 year old boy the entire time. Plan to bring some extra cash for snacks, drinks, and toys as they are offered everywhere! 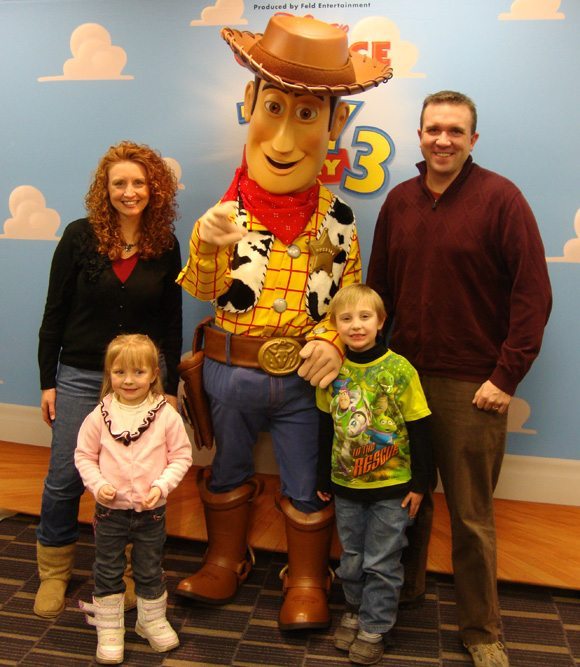 This was not a paid post. My own opinions were used based on my perceptions and experience. Thank you to Disney on Ice who provided the products for review & previous giveaway through Feld Entertainment.

3 thoughts on “Review of Disney on Ice Toy Story 3”