Thinking about going to the circus? Read my Ringling Bros. and Barnum & Bailey Circus Presents Built to Amaze! review from my family’s experience.

Easy Experience at the Covelli Center

My most recent circus adventure was at the Covelli Center in Youngstown, Ohio to see the Ringling Bros. and Barnum & Bailey Circus Presents Built to Amaze!  Since we had never been there before and were not familiar with the area, we gave ourselves extra traveling time.  When we got off at our exit, we were pleasantly surprised to discover that the Covelli Center was right near the highway.  It was remarkably easy to find which made getting in and out of the parking lot very free of stress allowing us to feel relaxed to enjoy our experience.

Arriving early enabled us to be among the first to enter the arena for the Free All-Access Pre-show.   First the kids got their “Greatest Show on Earth” tattoos.  I recommend having this extra special tattoo put on their forearm to avoid the “tragedy” of it washing off during the intermission trip to the bathroom.  If your kids like to dress-up, this is also a good time to get pictures taken in real circus costumes before the crowds and lines begin to form.

Be prepared that Ringling Bros. now has a giant circus train bounce house.  It is huge and hard to avoid being seen, so if this is something your kids like to gravitate towards, be sure to dress them appropriately and have easy shoes to help things go smoothly.  Though there is an additional cost per child, kids are given a bracelet that allows them unlimited times through the train.

Artwork by a Ringling Bros. Elephant

While entering to win the elephant painting, the kids picked up their clown noses, tiger conservation bracelets, and small bags of Campfire miniature marshmallows, a huge hit snack during the first half of the show.  We then found seats around the ring area in anticipation of seeing Asia, the elephant, paint a picture.  Grabbing seats early proved to be a real treat because we sat comfortably with a clear view of everything.  It was amazing to be so close as not one but two elephants came out into the ring.  The kids gasped at their size when they walked and sent a breeze of air onto us.

If you are familiar with other Ringling Bros. shows, Built to Amaze! was a mix of some familiar and some new performers doing new and exciting acts with a clever twist on the construction theme.  Audience members will find themselves chuckling each time they notice unique details.  My personal favorite was the stilt walker costumes designed to look like caution cones.  They were so whimsical the kids were pointing and laughing.  This was also the first and probably last time I will ever see an elephant wearing a hard hat and tool belt.  I absolutely adored this added theme touch.  Instead of acrobatics typically being performed from hoops up in the air, they were done from lit up cone shapes twirling in the sky by the Kiev Aerialist Enchantresses creating an absolutely fascinating visual effect.

Built to Amaze! is Full of New Excitement

Many acts in Built to Amaze! were truly unique to anything I had ever seen before.   I was literally on the edge of my seat as Franceleib Rodrigues performed the equivalent to crossing monkey bars using his feet from way up high.  Alex and Irena Emelin delighted everyone with their playful poodles.  Irena sported a most impressive fur coat.  I will not spoil the surprise, but it is a must see.

A twist on the traditional balancing acts, Duo Fusion  and Duo Solys astounded me as the women lifted the men all while wearing high heels!  The Trampoline Tower Tumblers were purely hypnotic, and the King Charles Troupe was a highly entertaining game of basketball on unicycles that stuck out as one of my favorite parts of the show.  Even though I have seen the Stars of the Steel Vortex and high wire act of the Danguir Troupe on more than one occasion, I still jump in my seat when their routines lead me to believe one might fall.  Of course, Tabayara Maluenda and his powerful tigers always leave us on edge and is my husband’s favorite part of the show.

Seating at the Circus

For anyone with children with shorter attention spans, seats in the center of either side of the arena are well worth the extra effort or cost so that it is easier for them to see everything.  I have found it necessary to point out acts taking place in other rings to younger kids.  Sure to be exciting, VIP tickets offer an up close and personal extra perk of actually riding though the Built to Amaze! show.

Though the kids were starting to get restless after intermission, the elephants perked them back up.  Their eyes widened in anticipation when Elliana Grace, the youngest female cannon ball in the world, rode out on her giant cannon.  If possible, I also recommend taking advantage of earlier shows with younger spectators to avoid being too close to bedtimes.

With the economy being what it is, it did not surprise me to have noted that my most recent trips to the circus are not what I recall from the past.  There seems to be fewer animals and fewer performers these days.  That being said, I feel that the quality of the performances still leave me in awe just as much as the first time I ever experienced a Ringling Bros. and Barnum & Bailey Circus ).  Is it the same show it was eleven years ago? Of course it is not, but I would not want to see the same show year after year. Hence, I strongly encourage others to instead of looking at it for what it is not, to look at the circus for what it is, an amazing compilation of the most talented athletes performing brave and breathtaking stunts for the sheer satisfaction of bringing smiles to others.

At the end of the day, Built to Amaze! was a show to remember.  I look forward to enjoying the Greatest Show on Earth with my family for many, many years to come. 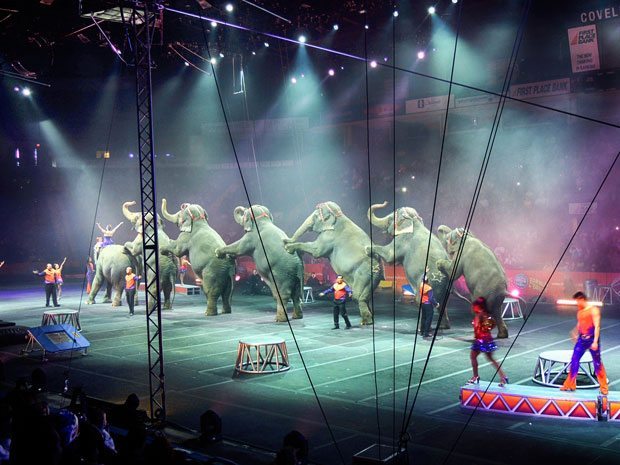 This was not a paid post. My own opinions were used based on my perceptions and experience. Thank you to Feld Entertainment who provided the tickets for review.

Kim is a mom who takes pride in sharing her community and its surrounding area with her family. With so many great ways to spend time with family and friends in the Akron area, she loves to share her findings with others. She has a passion for her family, crafts, mathematics, outdoors, camping, music, nature, education, environment, running, fitness, cooking, and reading (not necessarily in that order). Kim blogged for AkronOhioMoms in 2013.
Sign up for our Ohio Specific Newsletter- Each Email Focused on Only our best Fabulous Local News and Ideas!