Are you a flatbread fan? Have you tried Naan? Do you even know what Naan is? Until now, I’ve only had Naan at our favorite Indian restaurant, The Saffron Patch. I always enjoy Naan as a side with our Indian meal. Although I’ve enjoyed it at restaurants, I’ve never tried it at home until now. We had the opportunity to sample Stonefire Naan and now my whole family love it!

What is Naan Flatbread?

Naan is soft, teardrop-shaped flatbread of India, baked in a tandoor oven. It is hand-stretched and made of natural ingredients, free of preservatives, additives, artificial colors, trans fat and hydrogenated oils.

What is Naan used for? Only Indian food? Not at all. Naan is so versatile, once you try it, you will use it for everything. Naan is perfect for Pizza, Paninis, Sandwiches, as a healthy snack, with dips like hummus, and as a side to curry, soup, chili, or any  meal.

We were able to sample all 3 flavors of Stonefire’s Authentic Flatbread Naan: Original Naan, Whole Grain, and Garlic.

My kids are adventurous eaters, they like to try new things. As soon as my 6 year old saw the Naan, he wanted it as a snack. Although I knew there were many recipes on the Stonefire website, he wanted it now. He immediately saw it as fresh bread and asked for a “slice” of Stonefire Whole Grain Naan with butter.  It’s a healthy snack, so I gave it to him. He enjoyed it so much that his 4 year old sister came in for a sample too! Later that week, they asked for more Naan at snacktime. I added a little melted cheese on top for a simple snack. They really enjoyed it. Naan taste best when it is served a little warm. So, Stonefire Naan is kid-approved.

Like I said, Stonefire has a great assortment of recipes with Naan to choose from to make any imaginable meal out of Naan. Breakfast Naan Pizza, Grilled Chicken with Pesto Naan Pizza, Grilled Naan with Brie Cheese, Hell’s Kitchen Naan Panini, Hell’s Kitchen Chicken Quesadilla, Peanut Butter and Banana Naan Panini, Turkey Wrap, Chickpea Wrap, Naan Burger, and so many more.
From our experience, you can load Stonefire’s Naan up with any variety of toppings and the results are the same. A delicious tasting meal!
Below is a simple take on a Naan Pizza/Panini. We used leftover Pizza Dip from a party the night before and added fresh basil to warm Stonefire Naan. It was fantastic. The Naan is so soft on the inside with just enough browning on the outside. The Original Stonefire Naan is compliments so many flavors. 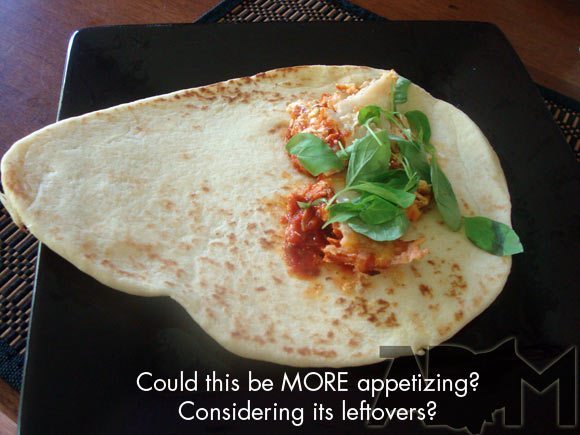 Although we don’t have a Panini maker, we tried our hand at creating our own home-made Stonefire Naan Panini. Beow is a delicious baked cod “panini” that my family has enjoyed twice so far, at the request of my kids. Stonefire Naan just makes everything taste better.

If you like garlic, you will love the flavor of Stonefire’s Garlic Naan. It is bursting with garlic flavor. I wasn’t sure if my kids would like it or not, but since they are so use to eating Naan now, they didn’t think twice about it. They gobbled it up. We make great turkey sandwiches with the Stonfire Garlic Naan.

These are just a few ways we have enjoyed Stonefire Naan. I plan to get adventurous and try out some of Stonefire’s Naan recipes, especially the Hell’s Kitchen recipes! However, I think it says a lot that my family was able to incorporate this new product into our meals effortlessly with great results.

In fact, I may add one of my recipes to the Hell’s Kitchen Chef Challenge.

Stonefire is giving you the chance to win an assort of Stonefire Flatbread Naan: 2 Original Naan, 1 Whole Grain, and 1 Garlic. ( $12 value)

30 Day Winning Rule applies, so if you win this, you are still eligible to win again this month, so go ahead and enter! For complete contest rules, please see our Contest Statement and Blog Disclosure.

Contest ends at 11:59pm EST on September 17, 2011 when a winner will be drawn at random. I will notify the winners and they will have 36 hours to respond!

This was not a paid post. My own opinions were used based on my perceptions and experience. Thank you to Stonefire who provided the products for review and giveaway.