As a mom there are few things worse then hugging your child and having them feeling like they are on fire. The hardest part about a fever is knowing how high it is.  With my old thermometer hold my son still until it beeped, which felt like forever. Not anymore! Our new Exergen Smart Glow Temporal Thermometer has changed temperature taking for us.

How does the Exergen Smart Glow Temporal Thermometer work?

The Exergen Smart Glow Temporal Thermometer uses the temporal artery, which runs across the forehead to accurately read body temperature. The temporal artery is directly connected to your heart through your carotid artery. This way you know you are getting an accurate reading. It will read about 1 degree higher then oral temperature and about 2 degrees higher then an underarm reading, thus giving you a much more accurate reading then your old thermometer.

The Exergen Smart Glow Temporal Thermometer features a very softly lit display. So when I sneak into the boys rooms to check them in the middle of the night, I don’t have to worry about waking them up. It also has a silent mode so I don’t have to worry about the annoying beeping of our old thermometer. I tried it and without the beeping and with the smart glow, I can see the temperature but it doesn’t wake them. 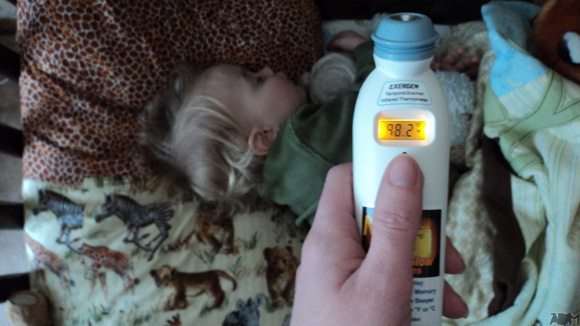 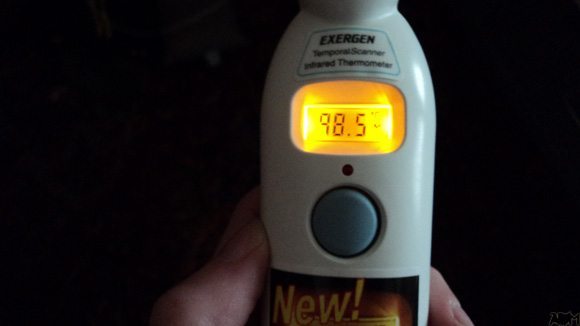 Many Doctors use Exergen

Exergen also makes a model that you may have seen the last time you took your child to the doctor.  The profession version is used many hospitals and doctors offices all over the country.  It is #1 recommended thermometer by pediatricians and for the 3rd year in a row it is also the #1 selling retail thermometer.

Is it just for kids?

Not at all, you can use the Exergen Smart Glow Thermometer on all ages!  I have used it on myself. I wish I had one of these a few years ago when I was a hospice care provider, it would have been so nice not to wake up my resting clients just to check their temperature.

It’s easy to use.

Open the package put in the battery(which is included). Remove the cap that protects the lens (if it’s  gets oily simply wipe with alcohol swab). Hold you thumb on the button, place the probe flat on the center of the forehead. Press and hold the button as you gently slide to the hairline.  Release the button and you have an accurate reading. The whole process takes only a few seconds.

Got a sweaty forehead?

No worries. Press and hold the scan button and place the probe on the neck right behind the ear lobe. Release the button and check the reading.

You can buy the  Exergen Smart Glow Temporal Thermometer  at Wal-Mart, Target, Walgreens, Rite Aid, Costco, Babies “R” Us, Toys “R” Us, Kroger and BJ’s nationwide and on Amazon.com for about $49.99.

This was not a paid post. My own opinions were used based on my perceptions and experience. Thank you to Exergen who provided the products for review.