Castillo de San Marcos is a National Monument and the oldest masonry fort in the USA.  Any trip to St. Augustine isn’t complete until you’ve had a tour. 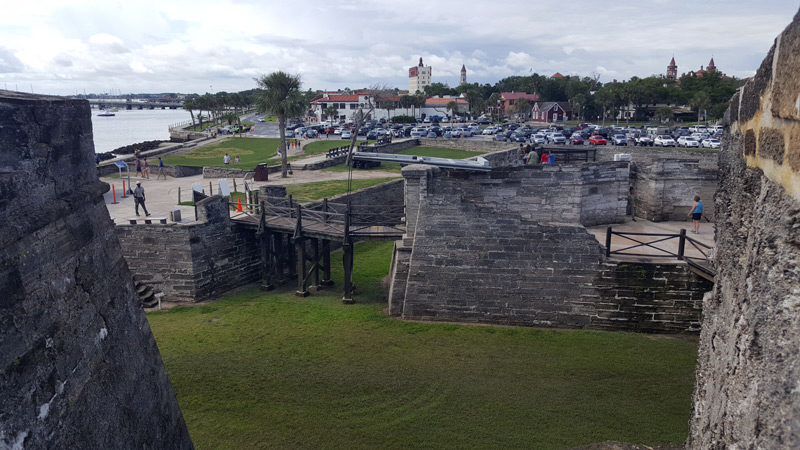 You can’t miss Castillo de San Marcos on the western shore of Matanza Bay. This impressive fort stands on a 20 acre plot to be explored and admired. This Spanish fortress was built to protect and defend Spain’s claim to the New World over 315 years ago. It is the oldest fort in the USA and oldest structure in the oldest city in the USA, St. Augustine. Yea, it’s pretty old! 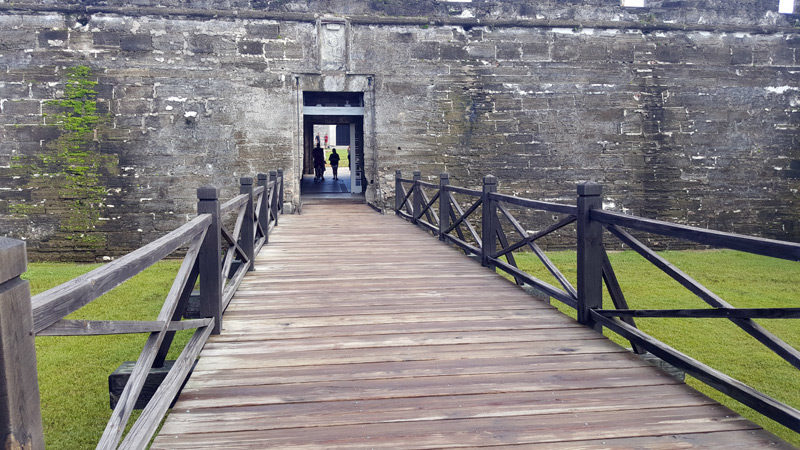 Step inside to explore the interior courtyard, inside the many rooms, and up on the top deck around this star-shaped fort. 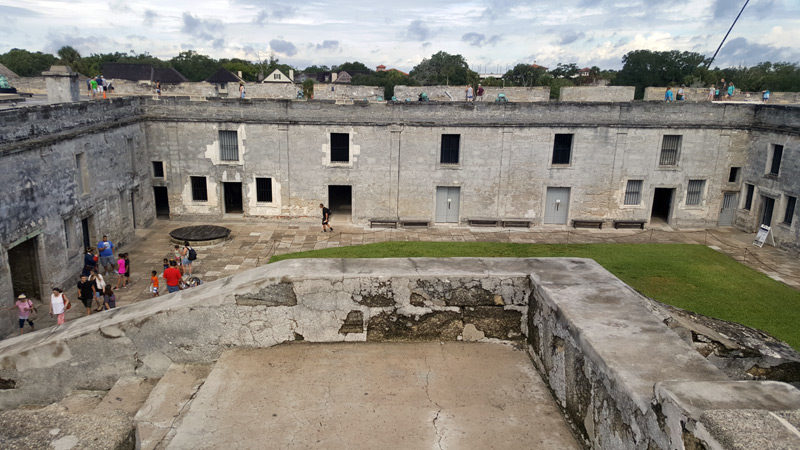 Inside, you’ll see how the solider (and sometimes St. Augustine families and prisoners) lived in the fort. 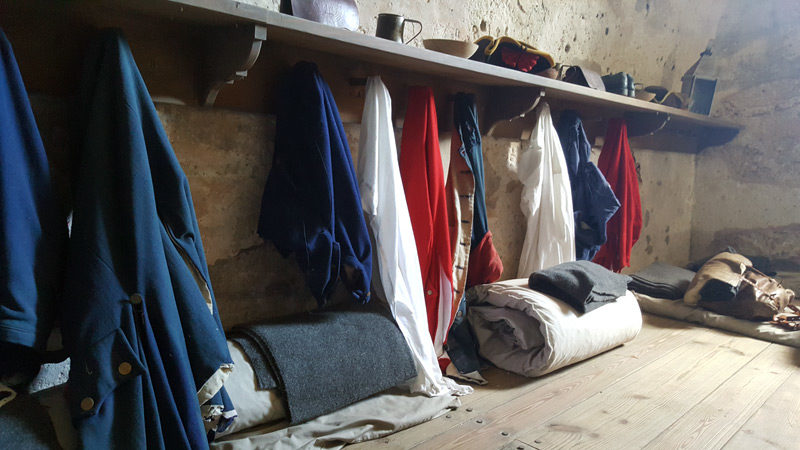 During rare downtown, soldiers would smoke and play card games together in this room. 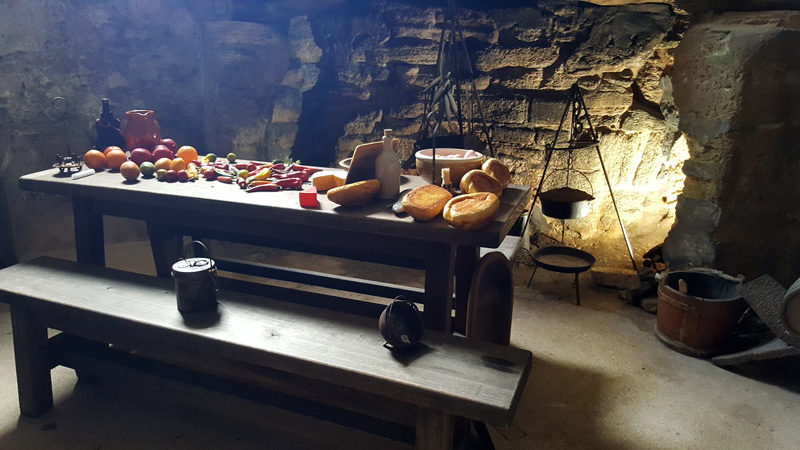 There are carvings on the walls in the fort of ships and even words. A mysterious Spanish message is near the ceiling and nobody can tell what the text says as it is in old Spanish and many letters worn off. Who knows the all mysteries this fort conceals. 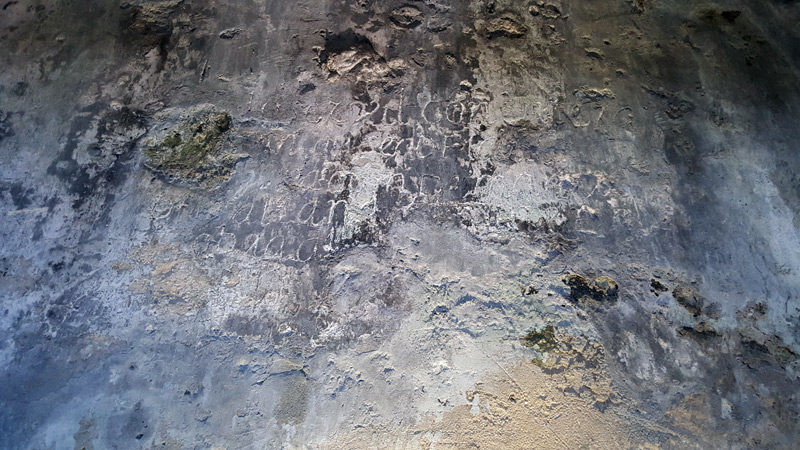 Throughout the fort, you’ll find “living historians” going about their day and educating you on life at Castillo de San Marcos. National Park personnel are also on hand to answer any questions you may have. 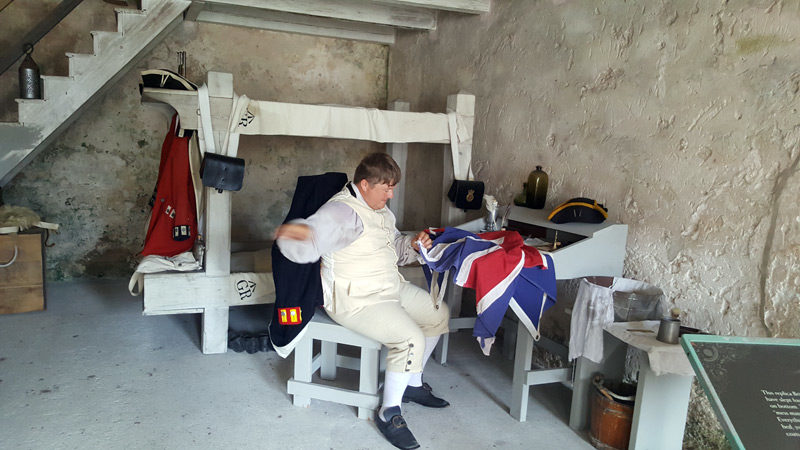 Discover how each room was used, including how they stored food for all the military and at time St. Augustine residents when the fort and city was under siege. 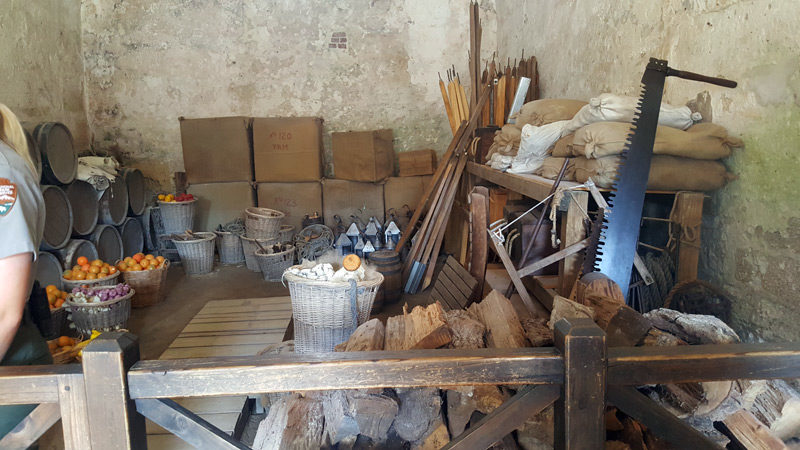 The reason the for the star-shaped fort was to accommodate the cannon back in the late 1600’s. 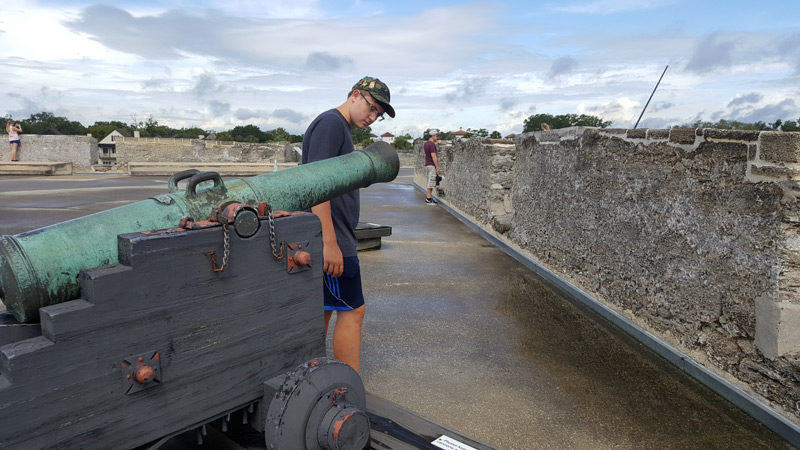 The star shaped fort allowed for cannons on the gun deck to create interlocking fields of fire. 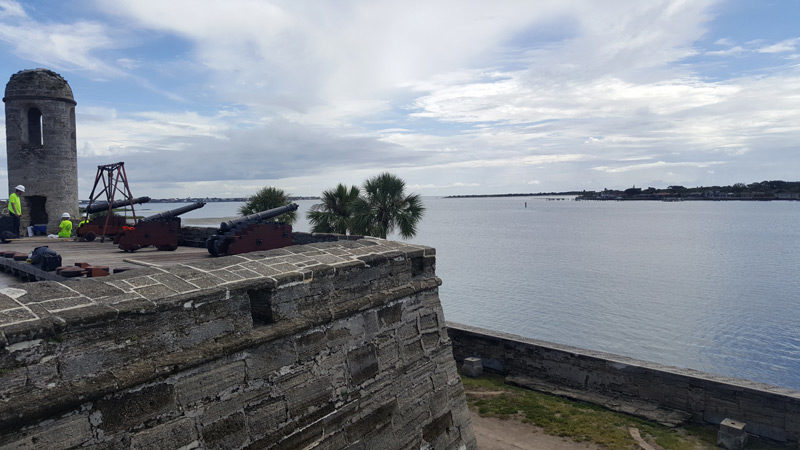 On the ground, the star shap allowed an obstacle course of defenses. The corners even repelled crossfire. 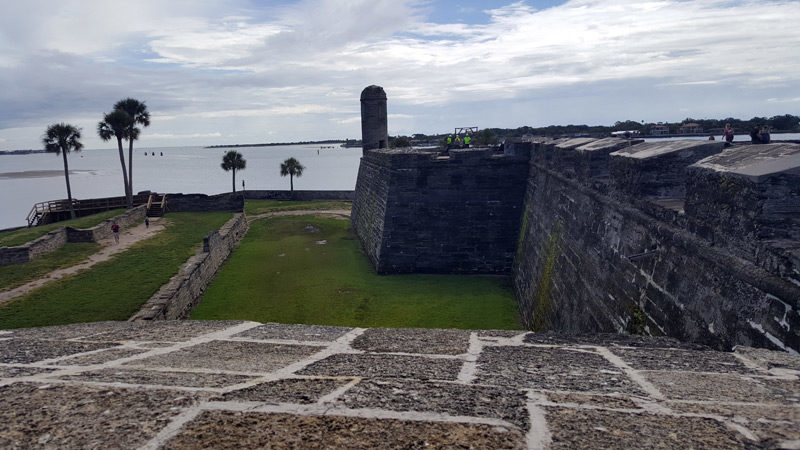 The fort was built out of a semi-rare form of limestone called coquina. These fossilized seashells composite had plenty of microscopic air pockets that was beneficial to the fort. In fact, the coquina walls absorbed and deflected projectiles like cannon balls. If it were solid like granite or brick, it would shatter. 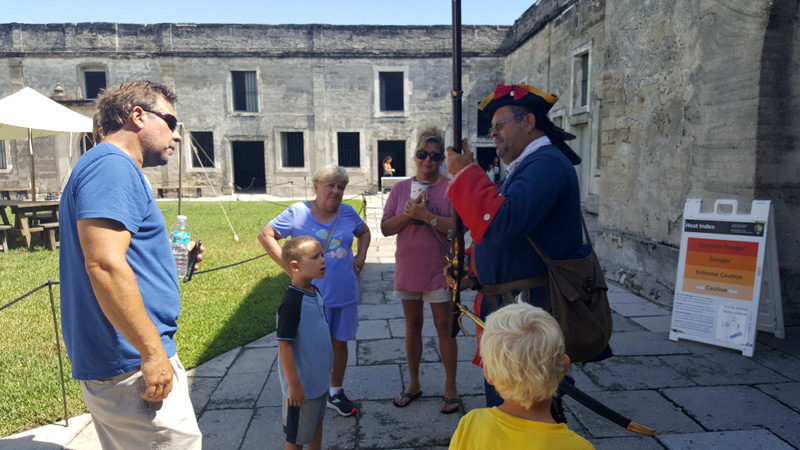 My family really enjoyed exploring Castillo de San Marcos. My kids are 12 and 14, so they were able to really understand the history behind the fort but even younger children would enjoy a visit. This magnificent fort that has never been conquered in battle is truly a remarkable piece of history.

Plus, it is a great way to see the city as well as the bay from above. 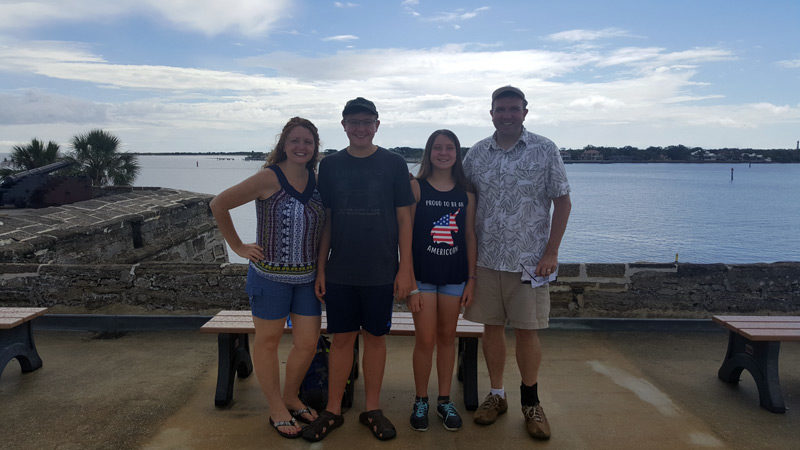 If you take the St. Augustine Scenic Cruise, you can check out the fort from the bay for another unique vantage point. 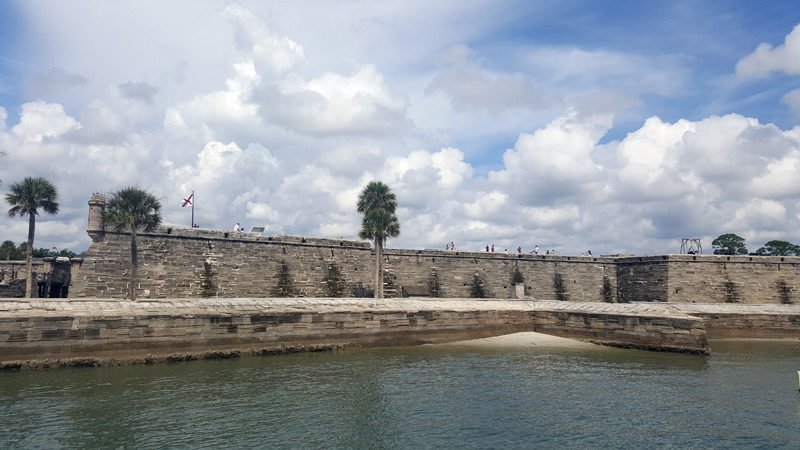 Castillo de San Marcos is a walk-in National Park, your tickets are valid for seven days. Stop by a couple times during your visit. For me, it makes sense to go at the beginning of your trip to get an idea of why Castillo de San Marcos is the focal point of historical St. Augustine and then again later once you’ve learned and toured the city. You’ll learn and grasp so much more the second time around. 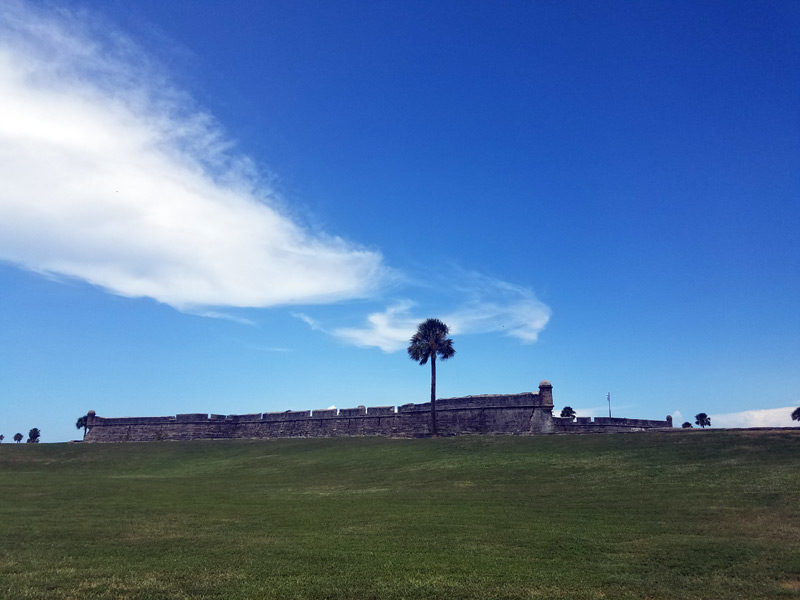 We are sharing our vacation LIVE across social media using #AOMExploresHistoricFL

Check out all of our Travel Florida features here.