My son has been collecting Beyblades for a while and loves to battle them.  Now, you can take your Beyblade competitions to the next level with the Beyblade Metal Fury Destroyer Dome by Hasbro.

Beyblade Video on How to Battle in Metal Fury Destroyer Dome

Beyblades are popular for kids to collect and battle against each other with.  There is definitely skill involved with playing with Beyblades and both skill and technique is improved with practice and time.  If your child collects Beyblades, finding a battle arena will take this toy to the next level for them!

The Beyblade Metal Fury Destroyer Dome is the newest Beyblade product to hit the shelves and proves to be a popular item this Christmas for kids ages 8 and up! Primarily for boys, however many girls – including my daughter – enjoy collecting and playing with Beyblades as well.

The Beyblade Metal Fury Destroyer Dome allows your kids to battle with Beyblades in a full 365 degrees!  When you compete with 2 Beyblades, they will spin around, crash, and battle like only Beyblades can!  Simply launch your Beyblades through the top of the dome and “let it rip”!  By experimenting with the angle, aim, and how you release your Beyblade, you can become the ultimate Beyblade competitor!

Your kids will love competing in a new way with Beyblades with the dome.  It’s another way to show off and improve their skills with friends! I like that there are 2 drop holes so you can easily compete with 2 players. You can also customize your dome with the provided stickers. 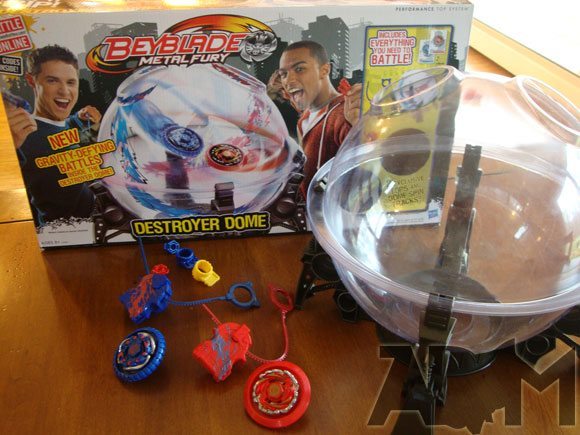 The Beyblade Metal Fury Destroyer Dome is a spherical design made of thin clear plastic so you can see all the action, all the time.  I mention that the material is a thin plastic for a couple reasons, mainly, I don’t want you to be surprised.

#1 You might be surprised and even worry about the quality – like my husband did. It does feel thin, however my son has had the Beyblade Triple Battle Set for 9 months and it is still in good condition and works as well as it did when he first opened it.  It doesn’t tare or rip.

#2 You may not think it will work. I don’t know if the thinness of the material has anything to do with how well the Beyblades perform and that is why it is designed this way or not. Either way, it sets the stage for great battles between Beyblade and it works.

Check out all the Beyblade action below.

Add the Beyblade Metal Fury Destroyer Dome to your Christmas list for boys ages 8 and up this year. Grab a couple extra Beyblades to go with it too! Beyblades make excellent stocking stuffers!

You can buy Beyblade Metal Fury Destroyer Dome on the Hasbro website for $39.99, at retailers nationwide, and on Amazon.com.

This was not a paid post. My own opinions were used based on my perceptions and experience. Thank you to Hasbro who provided the product for review.