The Shenandoah National Park in Virginia offers beautiful panoramas of the Blue Ridge mountains and the epic expanse of the Shenandoah Valley. 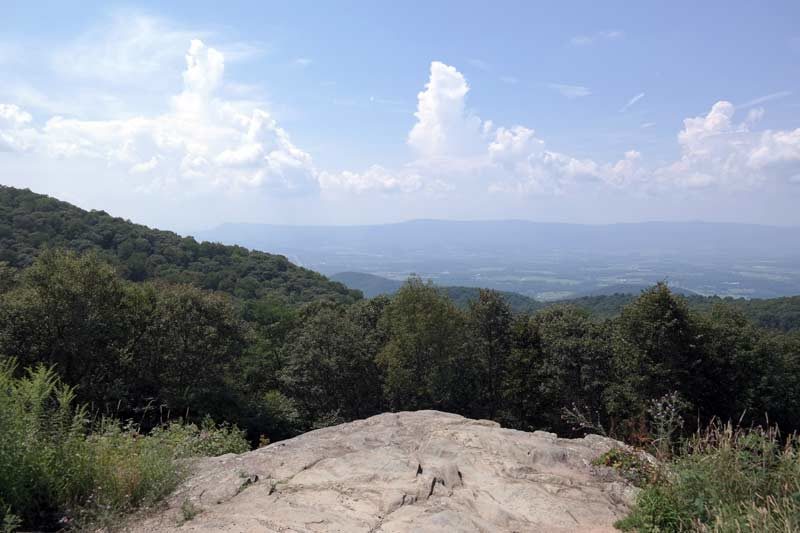 Straddling the mountaintops with Skyline Drive, every visitor receives ample opportunities to see God’s handiwork at a macro scale. 90% of the stops along the Skyline hardly require you to exit your car to see the vistas. 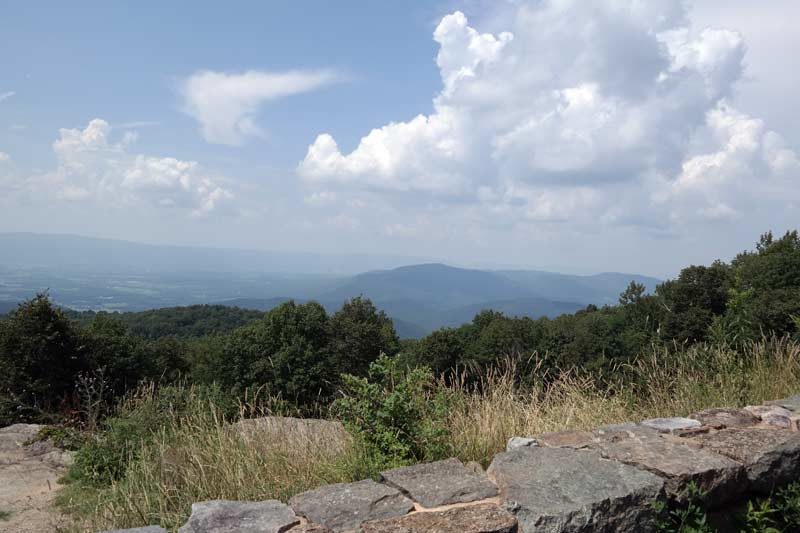 But that’s no way to experience the park. Just like any marathon runner with a 26.2 bumper sticker- you can’t purchase a National Park bumper sticker or even a refrigerator magnet WITHOUT hiking a trail! 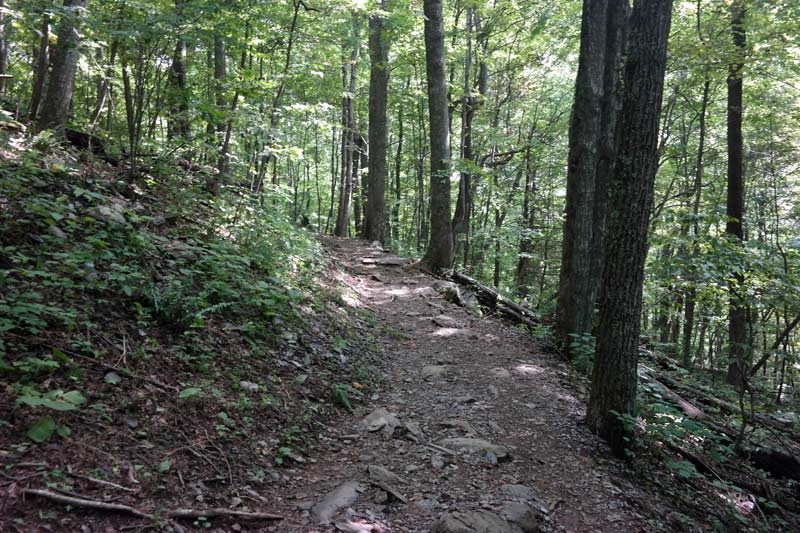 You can’t beat being in nature, next to a rushing river and lush forest!

With the Shenandoah being a mountain-top park, the trails scattered throughout the park often extend down the mountainsides, along streams and rivers, and more often than not showcases waterfalls. Being a fan of our own local Brandywine and Blue Hen Falls, my family chose the hike to the South River Falls.

(Tip: When you enter the park- Ask the Ranger collecting the entrance fee for specific paper maps for the trails you are interested in- they are not available individually at trailheads )

The South River Falls are labeled as Moderate. However, I think the ‘difficulty scale’ between rolling Ohio hills and the Appalachian Mountains is graded on a bell curve.. there was nothing moderate on our hike.Parts of the trail are very rocky with steep inclines. 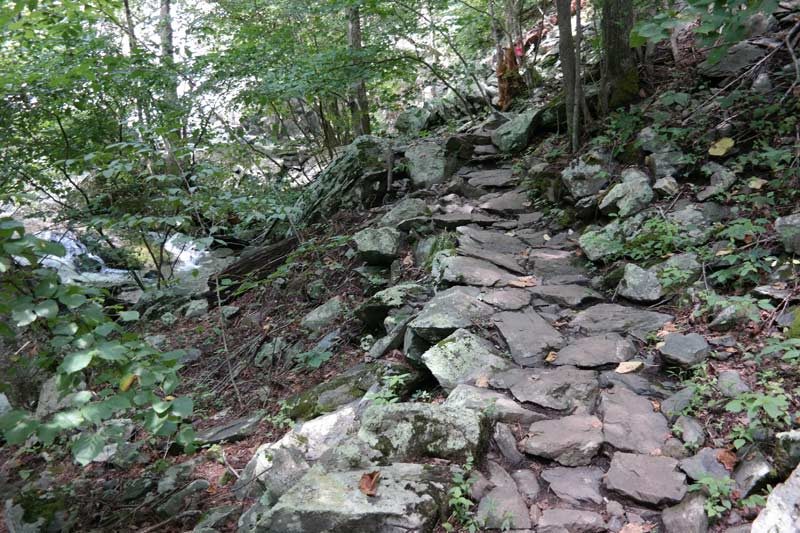 There were 2 streams to cross over but it wasn’t difficult as there were plenty of rocks to step on – of course with a recent rainfall, it might be a different story!

It was only 4 miles to and back from the waterfall when you add the additional 1.5 miles to go down to the waterfall, but it is a hard hike – both going down the hills in the beginning and especially walking back up! Plus, with two Type1 Diabetic Kids in tow, we carried our lunch, too much water, and a lot of sugar.

The scenery was well worth the hike! 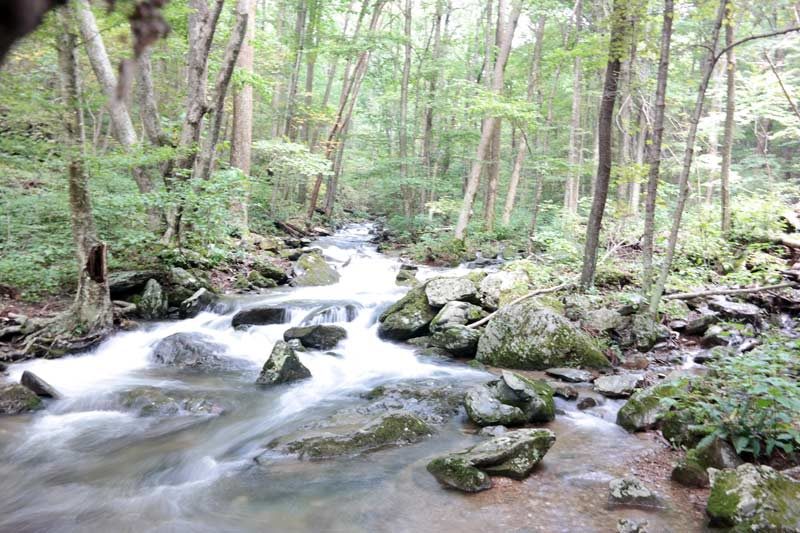 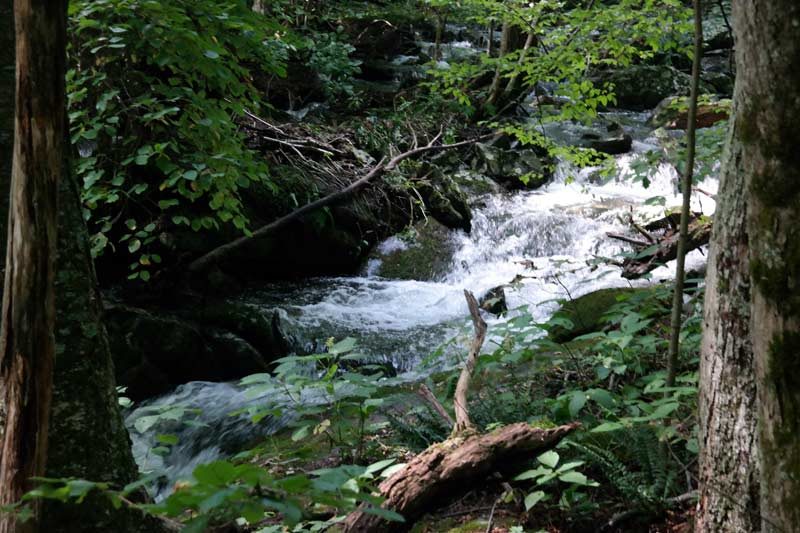 We stopped often to just enjoy the views and took plenty of pictures along the way! 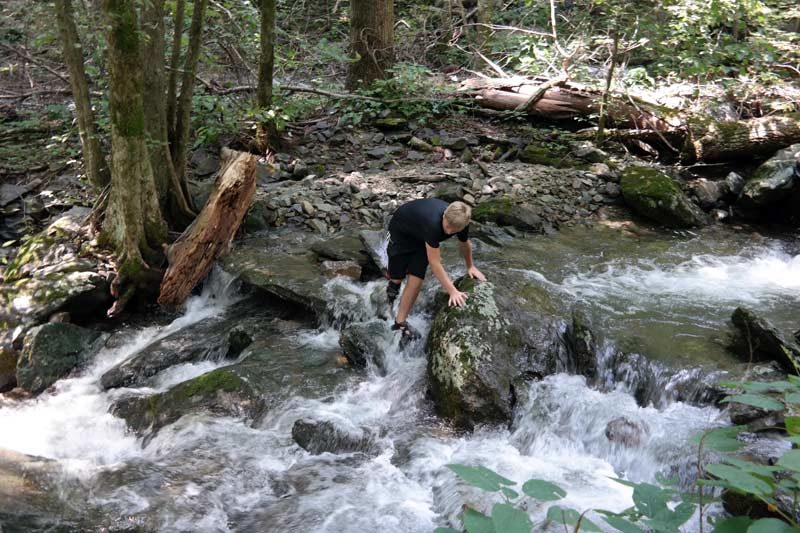 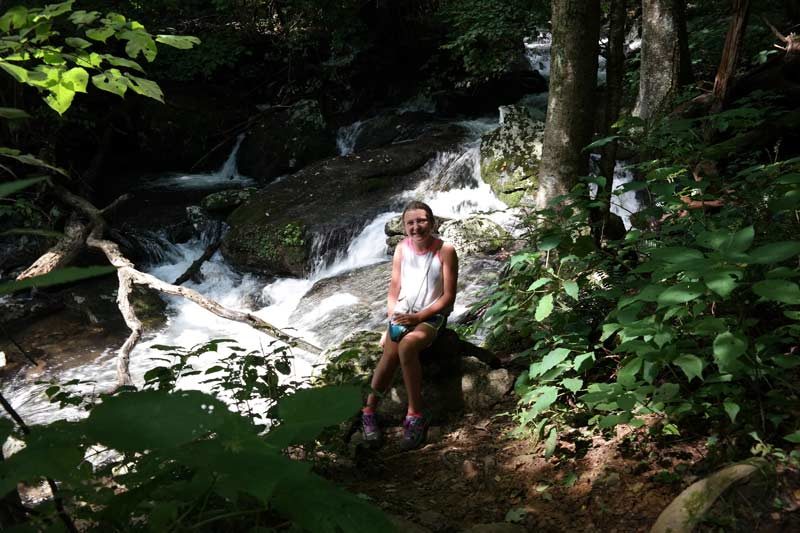 Almost 4 hours (we stopped for lunch, photos, and waterfalling!) we traveled up to 4 miles, crossed 2 streams, avoided one rattlesnake, and went up and down an elevation of 910 feet. 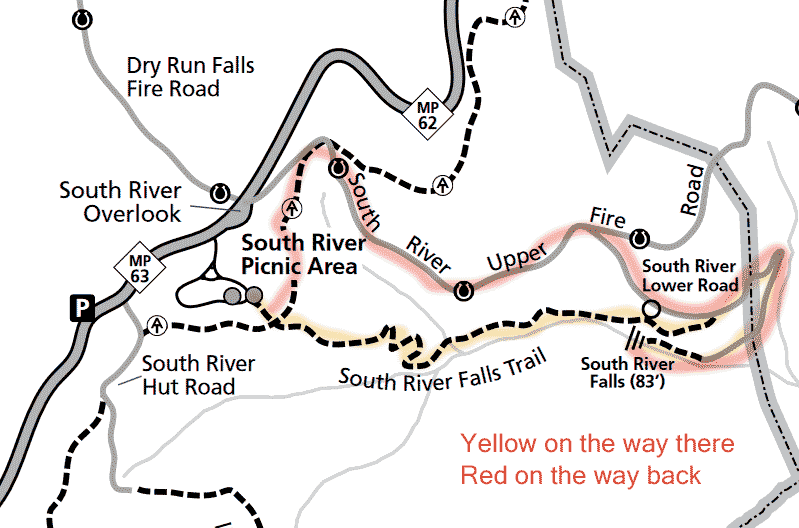 The view from the bottom of South River Falls was worth the hike!

The photo doesn’t do this magnificent waterfall justice, hopefully this video does!

We took plenty of pictures but the lighting was hard to get a great picture of us with the falls to our back. 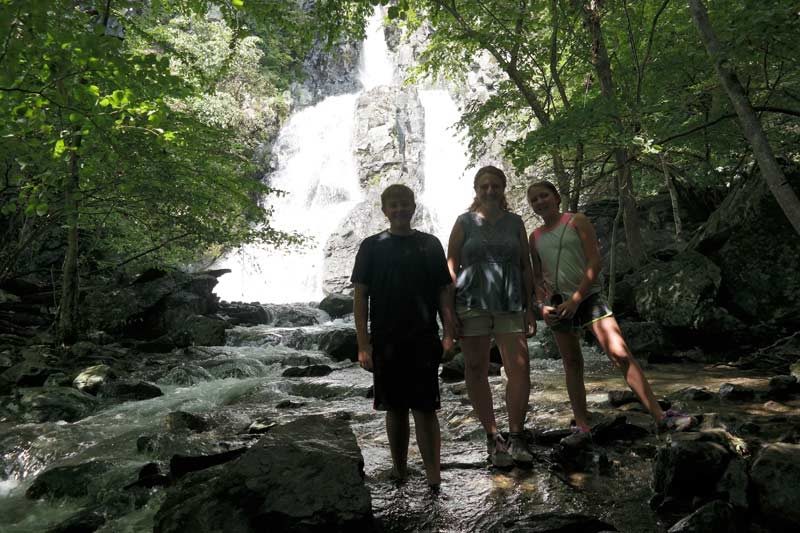 We were able to get pretty close from the side of the falls. There is even an additional path that you can climb that takes you all the way up the falls on one of the sides but we were just too tired! 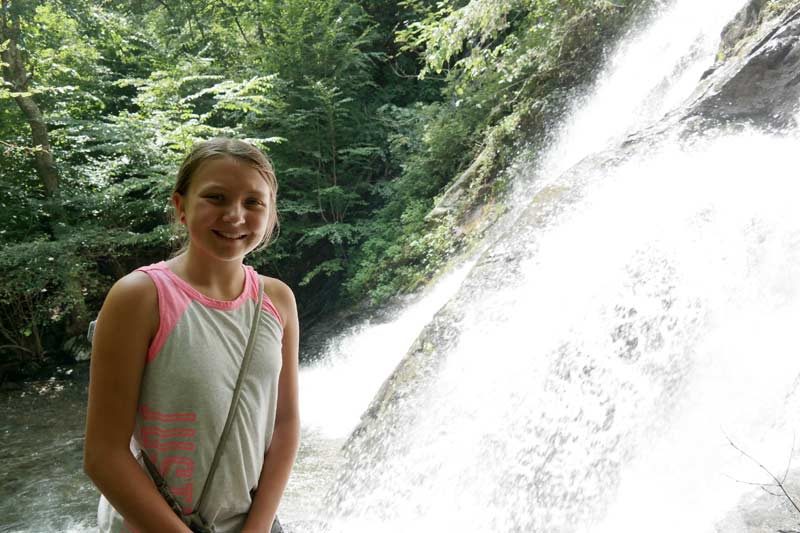 Through the entire trip we kept our eyes out for black bears.  Known to inhabit the Blue Ridge Mountains, we had hoped to see one… from far away. Later, while driving away from the visitor’s center, we saw a mama bear and 3 cubs from a very far distance – not photo worthy but at least we saw bears in the wild!

That was not the dangerous animal we were set to see up close, however. Once we reached the overlook, we found two rattlesnakes sunbathing. We weren’t alarmed because they were in their space and we were in our space, leaving each other alone. 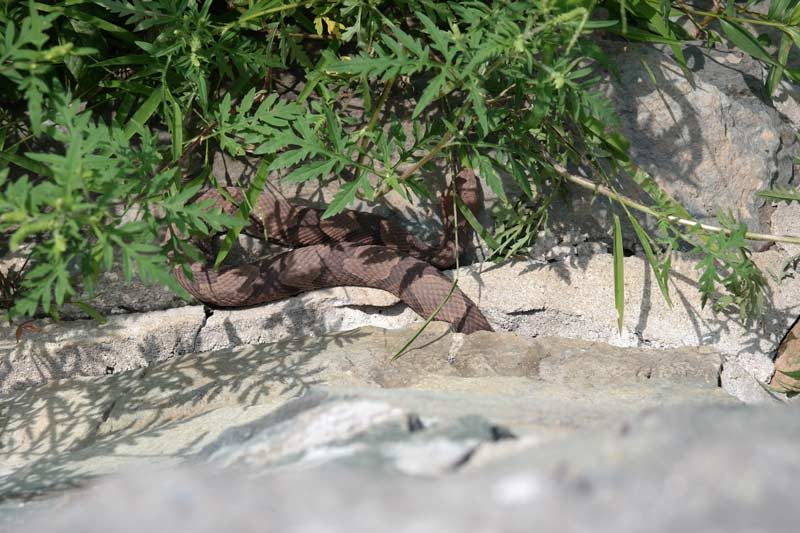 However, on our way back from the falls, sitting in the middle of the trail near the convergence of the Trail and the Upper Fire Road, the Russian couple ahead of us came across a very active Rattlesnake.  Screaming with glee, fear, and a whole lot of Russian language that I certainly didn’t understand, the couple stepped aside fast! 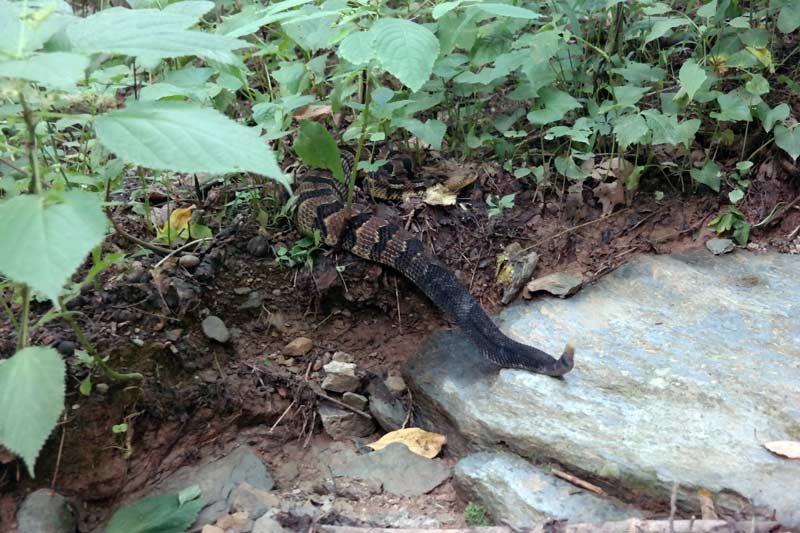 My 13 year old Elijah was only feet away from the couple.  Not speaking Russian, he only communicated directly with the snake.

With his tail buzzing with a rattling sound right off of a Nature special, the snake’s colored flared up to a black, and he coiled his body just 1″ off of the trail in some low grass.

Now, mind you, a coiled RATTLING rattlesnake less than 6 feet from the opposite side of the trail made passage impossible for those that enjoy living! (not passable at all due to poison ivy and rocks).  With my son on the opposite side of the snake, and miles of trail separating us (going back the way we came) we HAD to encourage the snake to move.

Not big rocks, and not AT the snake, but at the trail up against the snake.

This was a tough situation.

My husband drew this drawing to share with his coworkers.  I think it explains things.  I’m so proud of his artistry.

Another couple came from the opposite direction.  He started throwing rocks too!

Eventually the snake started moving once he realized that the rocks weren’t going to stop.

Crisis Averted. I didn’t breathe again until we got back to the car. I was so scared. We couldn’t our type 1 diabetic son hike the rest of the trail on his own but we couldn’t reach him because the rattlesnake wouldn’t let us pass. My daughter already had low blood sugar. This was one of the only times that I actually feared for my life or that of my kids – there would be no way any medical personnel could get to any of us within the recommended time of 1/2 hour for treatment if we were bite – something I researched once back in the car!

We didn’t venture off of the trail from then on, not for any pretty river photos or anything. Next time, we will wear boots and pants, even if it is 90°! Safety always has to be a priority, especially while hiking with children and especially diabetic children. However, don’t let fear deter you from exploring Shenandoah National Park or any other park. You wouldn’t want to miss out on this beauty! 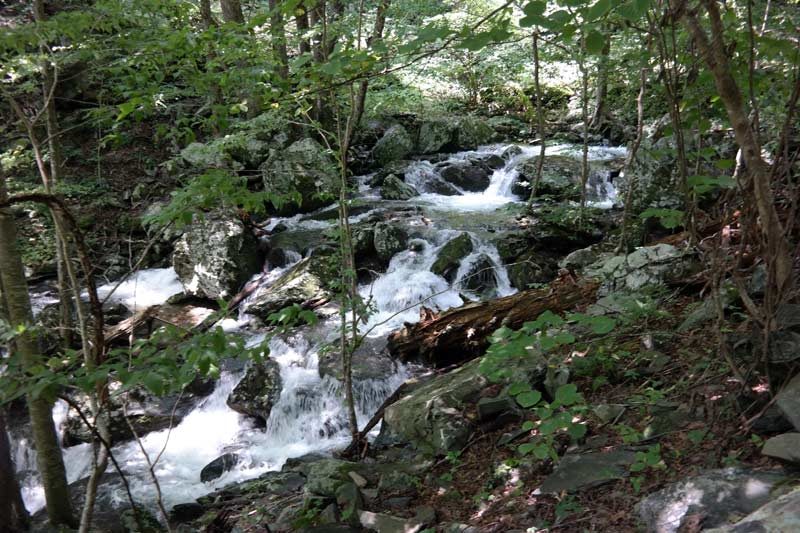