Disney’s TOMORROWLAND is in select theatres TONIGHT and nationwide tomorrow, May 22, 2015.

TOMORROWLAND  begins with a flashback of Frank Walker (George Clooney) as a young boy that loves nothing more than science, inventing, and experimenting. He even creates a “mostly-working” jet pack that he takes to Disney’s World Fair. This catches the eye of young Athena, who recruits him to TOMORROWLAND with the “T” pin. 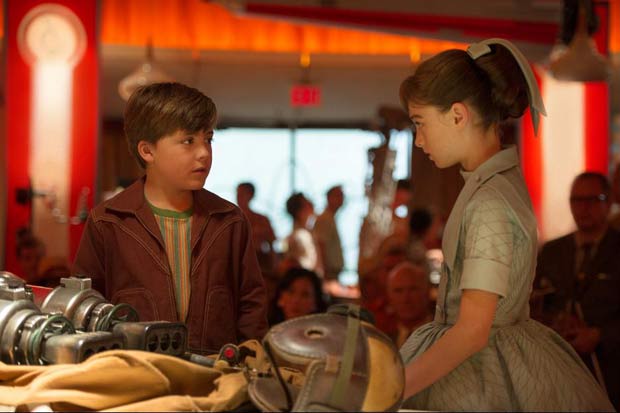 Back to present day, the world is full of doom and gloom, the end of NASA program, natural disasters are everywhere but nobody is trying to do anything about it, except for optimistic, Casey (Britt Robertson) who is smart, curious, and eager to make a difference in her world.

When she discovers the TOMORROWLAND pin, her world is changed forever. This discovery includes laugh-out-loud scenes that made the entire theater laugh out loud. 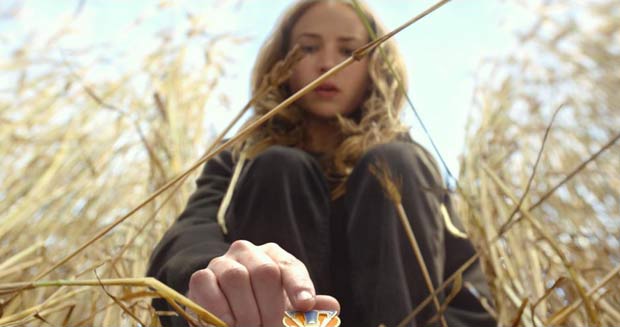 With the pin, she travels to a new world filled with the smartest, most creative people from Earth with technology and inventions beyond anything imaginable.

Later, she finds out that she was recruited by Athena ,the same girl that the young, boy-genius Frank Walker (Thomas Robinson) met as a boy at Disney’s World’s Fair. She hasn’t aged a day – is this a time travel movie?! Not exactly,  it is a multi-dimentional movie, which is even better.

I don’t want to spoil the fun by telling you all about the movie but let me tell you that it is an adventure-filled movie with suspense, space travel, history, laughter, friendship, and inspiration for the future.

Movies that leave you feeling empowered to make a difference and positive about the future is a rarity these days but that is exactly what you get with Disney’s TOMORROWLAND. I had heard that George Clooney starred in Disney’s TOMORROWLAND precisely because he liked the positive message in the story. I had no idea that I would leave the theatre with a spring in my step, smile on my face, and empowered to make a difference in this world – all from a movie!

Is TOMORROWLAND OK for Kids?

As far as if TOMORROWLAND is good for kids, I would say Yes. My kids are ages 8 and 10, we monitor everything they watch and don’t allow them to watch PG-13 movies. TOMORROWLAND is rated PG. There is violence but the ‘bad guys’ are mostly robots so there is no blood or gore.

The only “swear” word used is “hell” and it is used several times.

You have to make the call but I felt it was completely find for my youngest 8 year old.

This is all from the mind of Disney himself as a box labeled “1952” was discovered by accident in the Disney Studios archive.

Writer-producer Damon Lindelof was excited about this find and said, “I began to imagine that the contents of the box were a guide to a secret story that nobody knew. But if so, what would that story be? And the most obvious answer to me was that there really was a place called TOMORROWLAND that was not a theme park but existed somewhere in the real world.”

Disney was an optimist and believed technology was the key to our future. This is the entire basis of TOMORROWLAND.

“Walt Disney was constantly innovating,” said Filmmaker Brad Bird. “He had a very proactive and positive view of the future. I like to think that this film
is something that he would enjoy.” 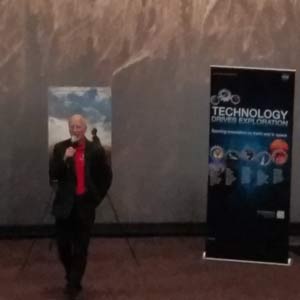 TOMORROWLAND is all about science, technology, and moving forward. During the media preview that I attended, we hear from a representative from NASA, Dr. Howard Ross, Director for Strategy, NASA Glenn Lewis Research Center. He talked about how innovative Walt Disney was and how he inspired him as a child, as he has many of us.

The movie encourages kids and people to be creative, use science, and change the world for good., Dr. Ross reminded us of the wealth of opportunities to experiment with science with our families at the Great Lakes Science Center.

We left the movie theatre feeling inspired to make a positive difference in our life. TOMORROWLAND is a great reminder that focusing on what is wrong in the world while not making an effort to make changes is not the way to go. At the end of the movie, Frank Walker and Casey are handing out TOMORROWLAND pin for the next round of TOMORROWLAND recruitment. These pins are for the brightest, most creative, and most passionate. They were given to young and old people from across the globe with various jobs.

My take-away is that every opportunity is an opportunity to make a difference. Do you believe that? What if we all did? Wouldn’t our world be a better place?What an inspiring movie!